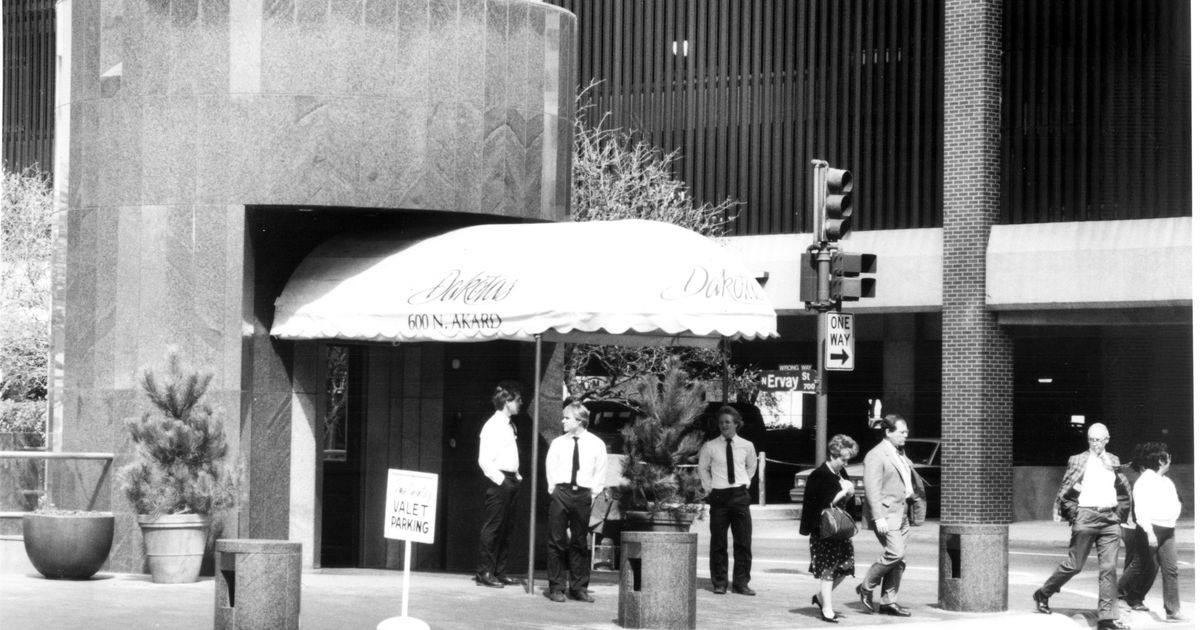 Rob Lowe, Brooke Shields, and a princess dined when Dakota’s Steakhouse was the hottest place in Dallas

Editor’s Note: Go back in The Dallas Morning News Archive.

The Dakota restaurant leaves behind an impressive legacy. From its big entry on the food scene in 1984 until its closure in 2020, Dakota’s has been a part of Dallas restaurant history. The unique underground atmosphere and design was a major draw to high-end clientele, but also the cause of its worst disaster in 2002.

‘Dinner under at Dakota’s’

The restaurant’s popularity among the Dallas gourmet clientele was due to its unique location and added perks when dining. Dallas Morning News reporter, Cheryl Hall, describes her experience at the Dakota restaurant for the High Profile section of The news March 10, 1985.

“The restaurant is located under the city-owned street – a technicality that allows the service of alcohol because the Lincoln Plaza, directly opposite and connected by an underground tunnel, is built on property purchased from the First Baptist Church which is limited to prohibiting the sale of alcohol.

“Once inside, it’s clear Dakota’s business is serious, right down to the pencil and notepad that is part of every table. Reserved tables are assigned quickly, ensuring busy executives have a lunch that can be full in an hour. Then when the bill arrives, Hall reports, give the butler the valet receipt to make your car wait.

The Dakota’s atmosphere and service gained such an exquisite reputation that the restaurant would be rented out for parties or be the perfect spot to admire the rich and famous.

Princess Stephanie, daughter of the late Princess Grace of Monaco, was one of the many famous people to visit Dallas in October 1986. She attended the Princess Grace Foundation’s “Junior Gala” at the Mistral nightclub of the Loews hotel Anatole on October 16. , 1986.

The news reported on Oct. 17 that “at 9 a.m., as Mistral guests eagerly awaited the royal arrival, Princess Stephanie was just sitting down to dinner at a private party she was hosting at the Dakota Restaurant.” It was also reported that the princess was surrounded by an entourage of 35, including her bodyguards, her actor and her then-boyfriend Rob Lowe with her bodyguards and actress Brooke Shields with her bodyguard.

“Princess Stephanie and Lowe sat next to each other and hugged and kissed throughout their platters of cold entrees, grilled shrimp, salad, blackened snapper and tenderloin. the kisses and the food, they smoked a lot. Miss Shields was sitting with Cecilia and Tony Peck, daughter and son of actor Gregory Peck. Tony Peck was rumored to be the date of model Cheryl Tiegs, but they would have attended “separate dinners”.

Princess Stephanie and her entourage arrived in fashion late to the gala at 10:30 p.m.

Dakota’s manufactures the TasteMaker 100 in 1999

In the 90s, Dakota continues to create an exquisite dining experience for customers and impresses New restaurant reviews, like Dotty Griffith.

August 10, 2002 The news reported that “a 12-inch water pipe snapped under the street at the intersection of North Akard Street and Ross Avenue on Friday, turning the crooked street into a pond and inundating downtown Dakota’s, an underground restaurant -City of Dallas “.

Dakota’s Steakhouse is back on the food scene

Kim Harwell, To guide writer, reported on Dec. 5, 2003, that “after a fairly extensive renovation, the restaurant reopened in mid-September with executive chef Ted Grieb at the bar and a new emphasis on steaks.”

The news At the time restaurant critic Leslie Brenner reviewed Dakota’s Steakhouse on December 30, 2011. She began her review with the feeling that “Dakota’s is perhaps the prettiest and most inviting steakhouse there is. Descend from the city center sidewalk in a glass elevator and admire the twinkling lights of the restaurant garden with its pretty waterfall on the way down. It feels festive and special from the start. The dining room has a refined New Orleans feel; it’s more comfortable and a bit more private than a lot of Dallas steakhouses. The welcome is warm and the graceful gas lamps mounted on the walls give everything a beautiful glow.

May 20, 2020, Local Dallas Post CultureMap, announces the news that the iconic Dakota’s Underground Steakhouse has announced that it has officially closed on May 19, 2020.