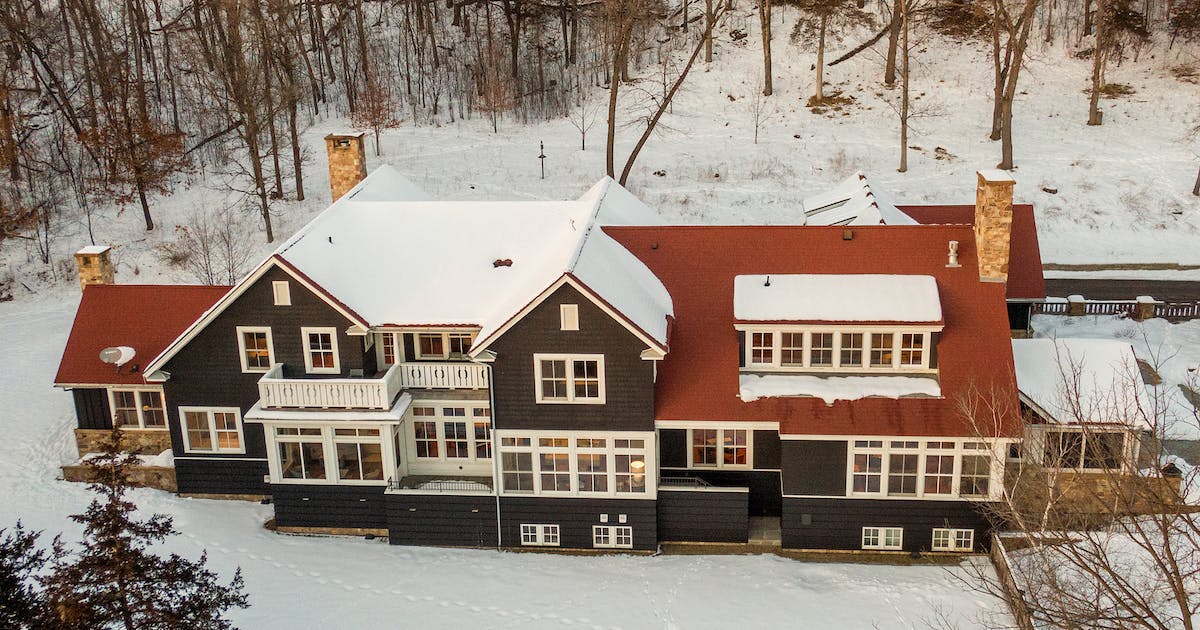 From Kathy and Dennis Brekken’s modern farm along the Cannon River, eagles can be spotted soaring through the valley every day.

Inside, their Cannon Falls home — custom-built by the Brekkens after Kathy, the former CEO of Midwest of Cannon Falls, retired — is also something of a sanctuary.

“We wanted privacy and being in the country, but having everything in town,” Kathy said. “We really loved our location, 35 minutes from the [Minneapolis-St. Paul International] the airport, because we travel a lot.

They decided to build a modern farmhouse in an area called Mineral Springs and hired Minneapolis-based Albertsson Hansen Architecture to realize their vision. When the house was completed in 2005, it garnered praise, even attracting the attention of the New York Times.

When building the house by the river, the Brekkens had several must-haves. They wanted single-level living and a connection to nature, so the master bedroom and bathroom were located on the main level.

“Our bedroom has windows on three sides with a view of the river. There’s a cliff on the other side. And I can see the moon and the sky from a little high window,” Kathy said.

They also wanted comfortable spaces for visiting adult children, spouses and grandchildren. Three guest rooms are equipped with a private bathroom or a connecting bathroom.

And they wanted a nice suite for Kathy’s mother. Thus, separate living quarters – with a living room, dining room, kitchenette and bedroom – were added to the second floor of the house.

Finally, the Brekkens wanted a home that would have a laid-back atmosphere while still being large enough to accommodate a range of activities.

“It’s a big house, but we didn’t want a grand or formal house,” Kathy said.

With the exception of a formal dining room, the gathering spaces have a relaxed atmosphere. Relaxation areas include multiple dining and seating areas. Three screened porches (two smaller ones and a larger one with a fireplace overlooking a pool and poolhouse) are also among the Brekken’s favorite places to hang out.

“We really wanted a place where our family would come together. Then when we crave our own space, there are spaces where we don’t have to feel on top of each other,” Kathy said. “We wanted a rambling family home.”

“I’m a nature collector and we had a lot of things as a family,” Kathy said. “But I didn’t want any clutter.”

An antique French pantry she bought in the south of France has been installed in the wall of a bedroom where bric-a-brac has its place. “It doesn’t take up space, but our family’s sentimental treasures are there with us,” she said.

Another of Kathy’s travel finds — an antique fireplace she spotted at a Paris flea market — found its way into the in-laws’ suite with a custom frame with a touch of fleur-de-lis.

Other custom touches included millwork, in which the Brekken wanted clean lines.

Storage was essential for the Brekkens, so there are custom cabinets as well as hidden storage throughout the house. A walk-in pantry in bold fuchsia, green, and robin’s egg blue features a rolling bookcase ladder and sliding window to the kitchen, which features high-end finishes and appliances.

The Brekkens wanted the house to have sustainable elements, so they switched to geothermal energy.

“It involved drilling multiple wells and it was quite a complex project,” Kathy said. “But we felt it was the right thing to do for the environment.”

After living in the house for 16 years, it’s time for the Brekkens, both now retired, to move on. So they listed their 8,695-square-foot, five-bedroom, seven-bathroom home on nearly 3 acres of land.

“It’s a house I’ve loved every minute of and I feel so lucky to have lived here. Life changes and we try to be proactive and think about the next stage of our lives,” said Kathy. “We would like to be closer to our two children and their families. It seems like the time has come to be more in the metropolitan area and to reduce the number of employees.”

The Brekkens also enjoyed their time in Cannon Falls and have access to a nearby bike path that goes from Cannon Falls to Red Wing. In the summer, the river sees a steady stream of outdoor enthusiasts who enjoy kayaking, tubing, and canoeing, but the house’s location still provides privacy.

“The house is high and looking out over the river,” Kathy said. “We’re right there, but they can’t see us but we can see them. It’s private like that.”

The 160-acre development where the home is located is limited to 10 lots of 2-4 acres, while the surrounding area includes hiking and walking trails. The land is owned by a homeowners association with an association fee of $600 per year.

Listing agent Laura Tiffany said the home’s location will continue to provide privacy and ample living space. (The lower level of the house is completely cleared if a future owner chooses to finish it.)

Tiffany added that a future owner will appreciate the quality of the house’s craftsmanship.

“When you look inside, they’ve taken such good care of the house that you’d think it’s brand new construction today,” she said.

NJ lines up to help Ukraine amid Russian military invasion