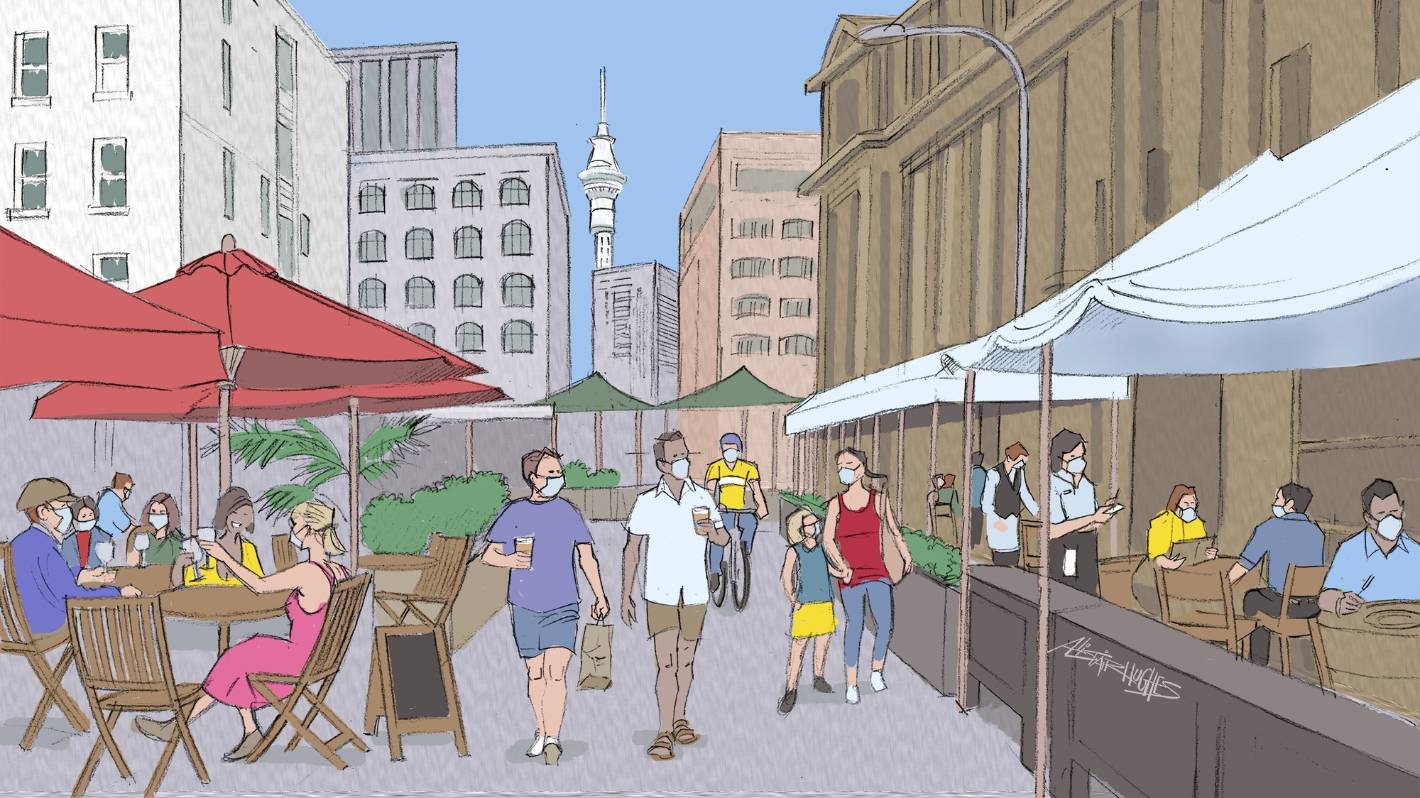 Our summer of alfresco dining

The key to surviving dinner hospitality and safety is to do like the Romans did and enjoy a meal outside on the trail, writes Virginia Fallon.

A small patch of bare asphalt is what Paul Patterson is basing his hopes for this summer on.

At the back of his Auckland restaurant, Parnell Porker, is a four-car parking lot that Patterson hopes to turn into an alfresco dining room in a bid to save the business he started only there. four months.

Switching to the outdoors could mean the restaurant could operate at near capacity under social distancing rules and, with $ 150,000 in lost income under its belt, that’s essential.

“We have already taken out a loan to get out of this. With our overhead, when we get to level 2 … we plan to leave the place in December.

Inspired by images from overseas, like very engaged New Yorkers eating out in the snow, the Restaurant Association is rallying advice across the motu to enable and support restaurants to expand into public spaces like roads , trails and parks.

Foodies who didn’t care about one side of the asphalt with their martinis, and hotel companies doing their best to survive, saw creative outdoor structures appear in the United States and Europe to adapt to the new. normality. Hangars, lean-tos and tents were erected on the paths, roads and parks, reminiscent of the crowded Italian squares where the true sense of al fresco was born.

While for now Aucklanders are making a few adjustments to the restrictions that allow them to gather for outdoor picnics in small groups, “Let’s learn from abroad,” said the Restaurant Association boss, Marisa Bidois. “(Outdoor dining) is something we’ve had feedback that has worked very well. We hope for a long, balmy summer.

Auckland council has already agreed to extend existing and new licenses for outdoor food only licenses, and has waived the application fees for new food licenses.

But, there are constraints with the sale of alcohol and since several agencies were involved, the council was unable to expedite exemptions from new or existing licenses. Bidois is urging these other regulators to allow liquor licenses to cover these extensive areas, saying some businesses will have to relocate outside to survive.

Since March 2020, 1,000 hotel businesses have closed and around 13,000 have lost their jobs. The fallout after the last lockdown is expected to be even greater.

The balm could be the great outdoors. According to Heart of the City Executive Director Viv Beck: “The idea of ​​sitting outside is fabulous. The ability to spread out on the streets and give people extra space is great, it creates dynamism. Our city was developed as a great place for human spaces – it’s the way people like to live, much like your home with indoor / outdoor spaces.

Vulcan Lane and the Viaduct would lend themselves particularly well to expanding alfresco dining, she says, but the newly revitalized Britomart Station area also had many new pedestrian spots. While the city has already struggled with how much space to give to pedestrians versus cars, Auckland councilor Richard Hills said giving more of the city to restoration “is 100% what we are doing. should do “.

“Almost every city in the United States has closed their streets and many cities are keeping these outdoor meals because they are so popular. My worry is that level 2 is going to last a long time… so being able to choose people is crucial for everyone’s health to be able to choose to eat out for their health, and these companies survive.

In Wellington, Conrad Banks has just ordered 104 outdoor heaters for its Dockside and Bin44 restaurants, and Eftpos portable table service terminals are also ready to go. The key to alfresco dining in the windy city, he says, is in the works, and although heaters have always been a part of his plans – they also had blankets, before people left with them – they have been accelerated, as the potential for a socially distant summer looms.

The two waterfront restaurants already have large outdoor spaces with downspouts to house punters, but Banks is hoping to expand. He believes the hardy Wellingtonians won’t be phased by the move away.

“Wellington on a good day is huge, and even on the fringe days they come out in force,” he says. “It’s the Kiwi way. We’re not like Australia which has great weather all the time – we know it’s cold in the south and we dress accordingly.

Back in Parnell, Patterson says the parking lot he wants to turn into a backyard will give his business a fighting chance.

“Look at the closure of all the big places – it’s more worrying because they know what’s coming. If it continues like this, there will be nothing in downtown Auckland except offices and apartments. We must be like Paris.

The Restaurant Association’s Survival Roadmap calls for other measures to help businesses survive, including:

* A food waste payment for perishables that expire during lockdown