A Kentucky restaurant established by KFC founder Harland Sanders for his wife in 1959, which features its original menu of fried chicken and fried green tomatoes, is listed for sale for $5 million.

Claudia Sanders Dinner House in Shelbyville, hit the market this week. The ad does not include a sale price. Listing agent Morgan Hancock said potential buyers will be required to sign a nondisclosure agreement and show proof of at least $5 million in cash.

Co-listing agent Jonathan Klunk said the large amount for the restaurant was “appropriate” for the unlisted property because it includes more than one property. Although he said they would be “happy” to have “more in-depth conversations with investors with ‘less cash’.

“We invite all interested parties to talk to us,” he told DailyMail.com on Friday. The price of the property could be over or under $5 million.

The sale of the three-acre property is being handled by Six Degrees Real Estate and includes the trademark and likeness of the Claudia Sanders name as well as Sanders family memorabilia.

A 5,000 square foot residence where Harland and Claudia Sanders lived for more than 20 years is also included.

However, it does not include the original chicken recipe with all 11 herbs and spices. Although a handwritten recipe exists, it will remain in the family. The new buyer will receive the recipe used by the restaurant, although it’s unclear if it matches the original KFC recipe, which is now owned by YUM and the family.

Claudia Sanders Dinner House (pictured) is on sale for $5million, although the price could go up or down. Relations require investors to show at least $5 million in cash 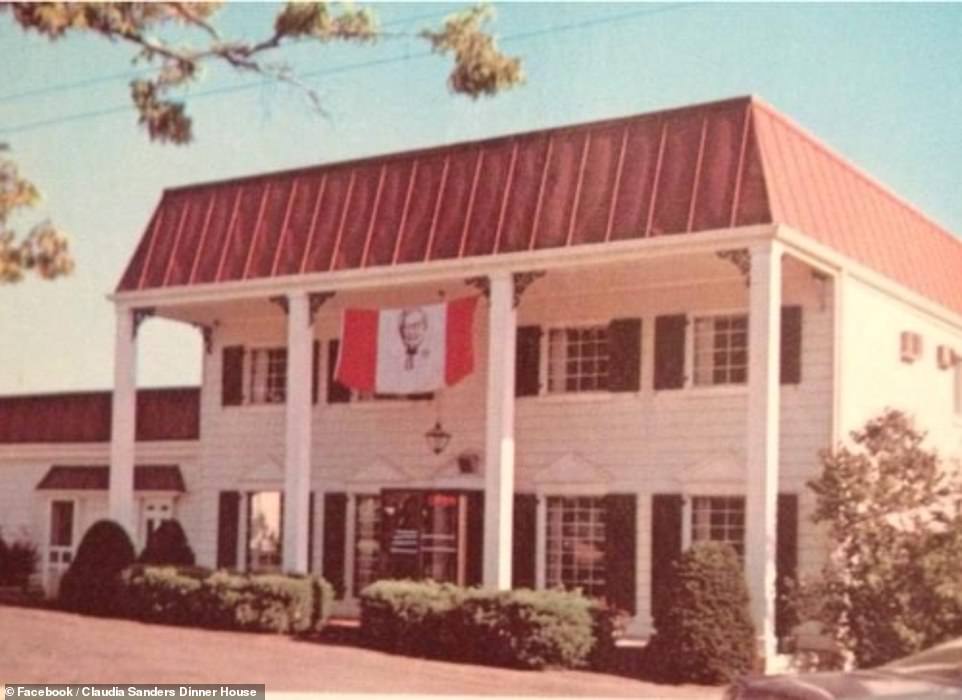 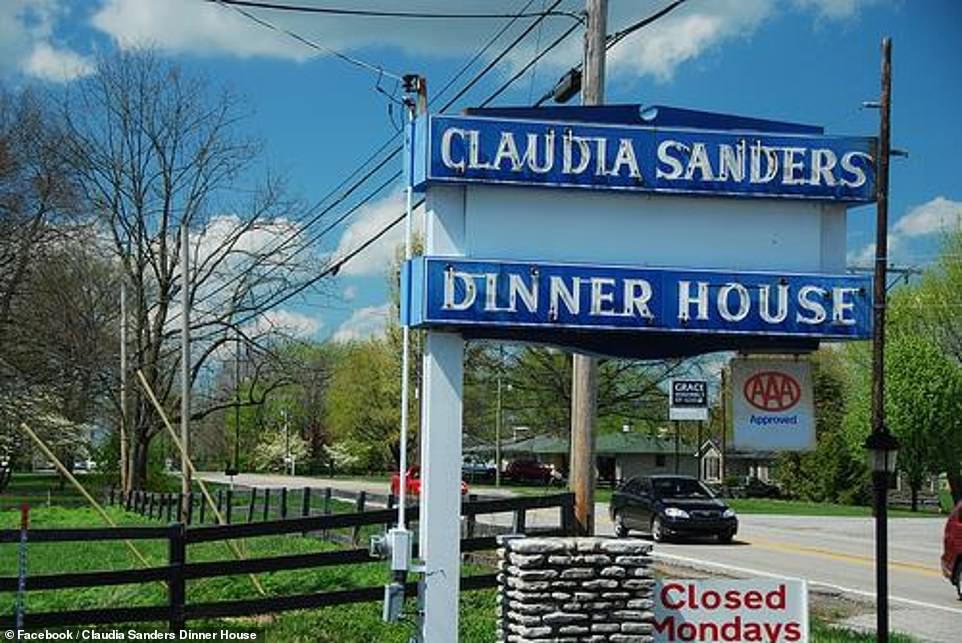 The restaurant opened in 1959 after Harland purchased it for his wife after closing the original KFC in Corbin, Kentucky. The restaurant would continue to serve as KFC’s headquarters for some time 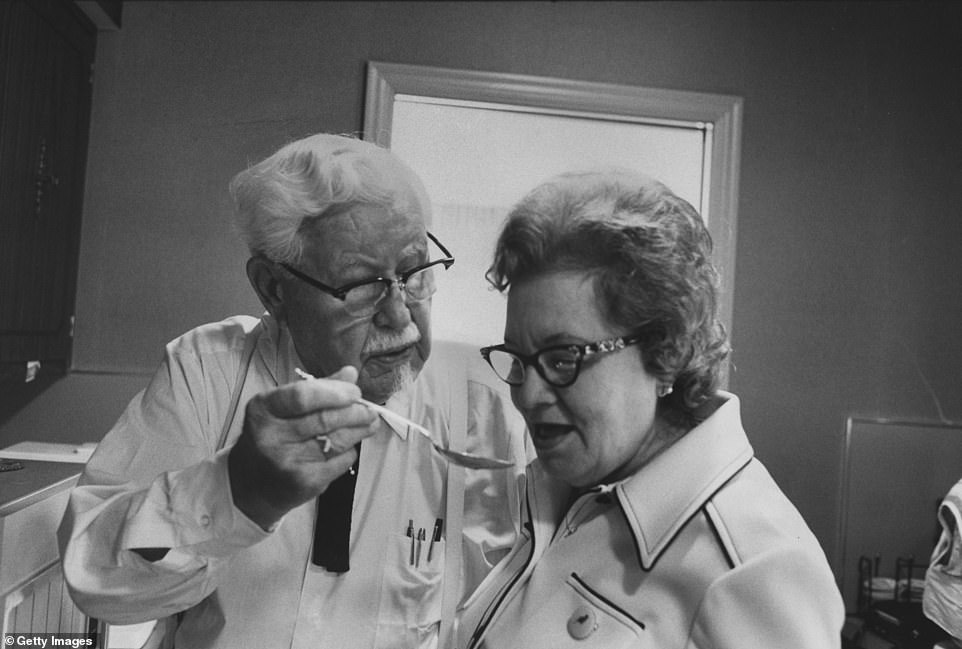 Among the memorabilia is the original colonel’s certificate given to Harland, which earned him the nickname Colonel Sanders and dressed in the now infamous suit and bow tie, according to Kentucky.com. It also includes a pressure cooker engraved with his name and the stove he used to teach franchise owners how to cook the perfect bucket of KFC.

The restaurant originally served as KFC’s headquarters after the Sanders closed their Corbin KFC site in 1952. That same year, Sanders would begin franchising his business, which would eventually become a global icon.

The couple opened Claudia Sanders Dinner House in 1959 when they moved to Shelbyville. It would become known for its yeast rolls, massive buffet, pies and fried chicken, Kentucky.com said. 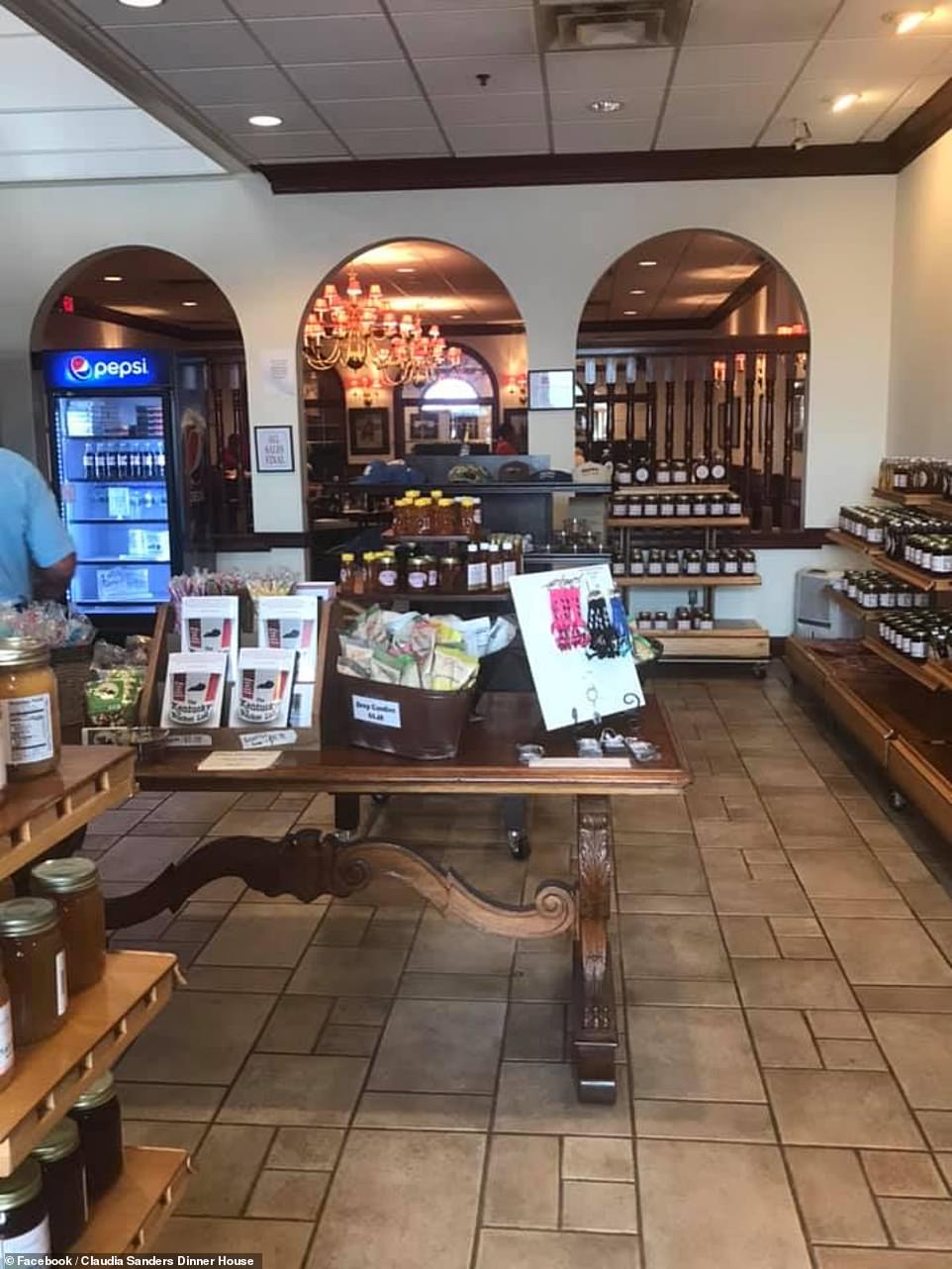 The restaurant also includes a gift shop and other memorabilia the new owners will receive, alongside Claudia’s trademark, brand, and likeness. 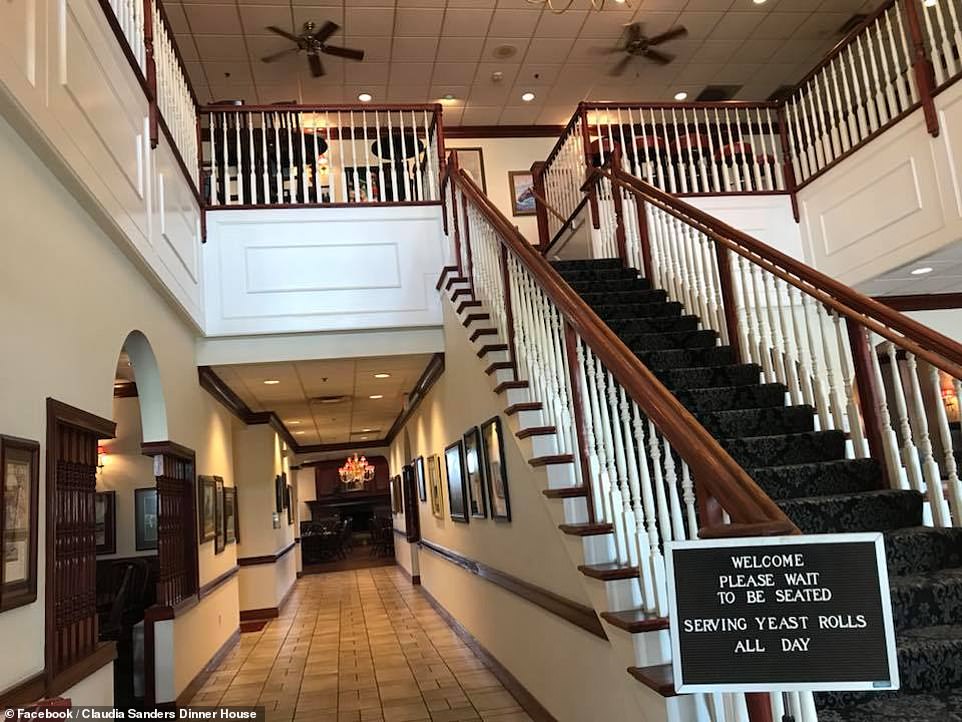 The property has an intimate atmosphere and has become known for its yeast rolls, massive buffet, pies and fried chicken 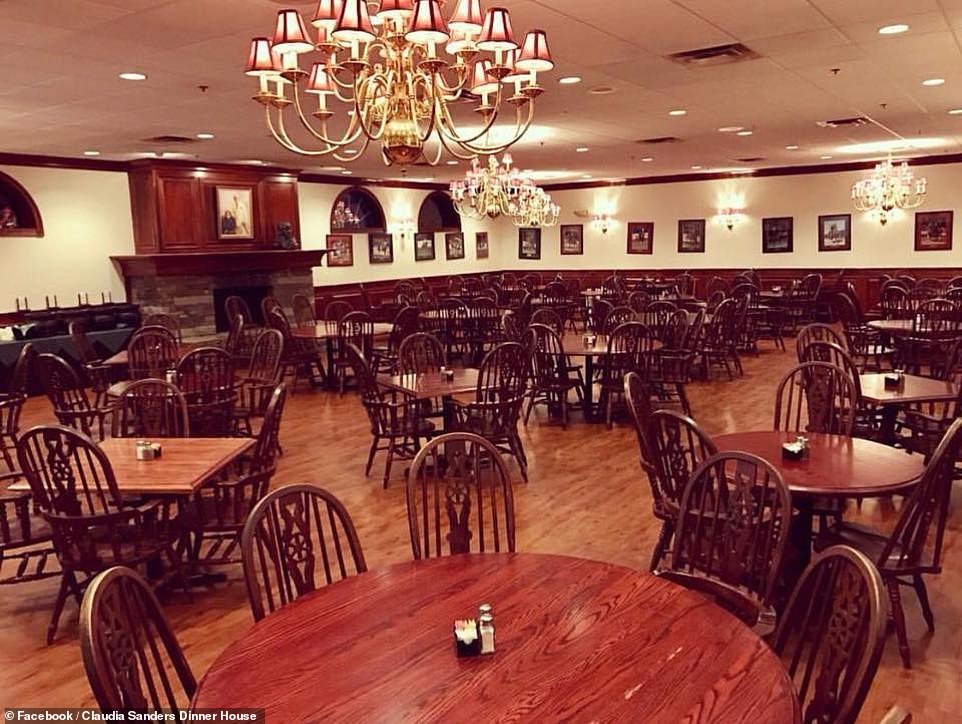 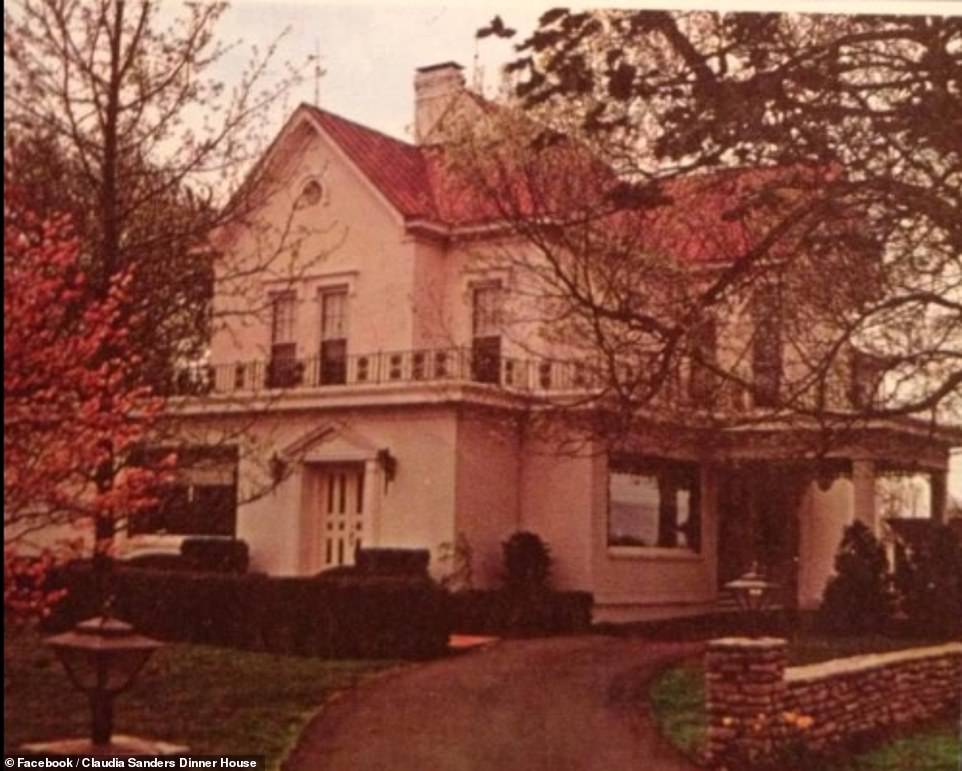 The restaurant would eventually burn down in 1999, but it has been rebuilt and the legacy continues.

“Claudia was the unspoken hero of her husband’s success in business,” Jonathan Klunk, a listing agent, said in a statement, according to Kentucky.com.

“And he wanted to pay homage to her by creating Claudia Sanders Dinner House and associated brands. There is so much rich history included in this sale; it’s exciting to think of the potential that awaits the right buyer – to honor and protect that heritage and grow the brand even further.

“The restaurant is owned solely by the Sanders and their close friends, the Settles,” Hancock also said in the statement.

“The Settles are now determined to find the next custodian of this historic brand who will not only fight to maintain its legacy, employees and staples here in this community, but potentially expand the Claudia Sanders brand nationwide. “

Hancock also told Kentucky.com that Tommy and Cherry Settle will ultimately decide who gets the restaurant. 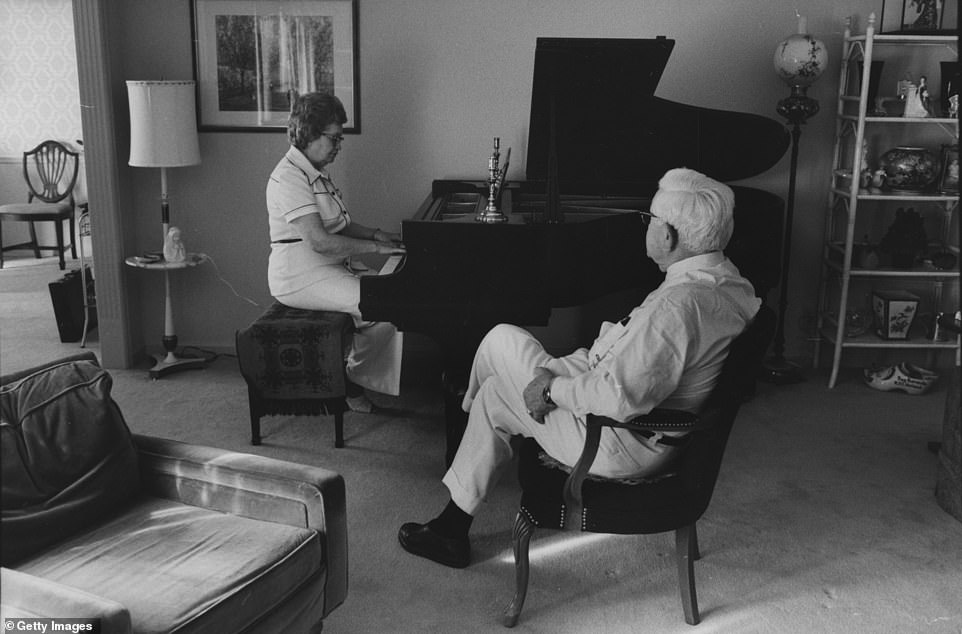 The secret recipe for their famous chicken does exist on a handwritten note, but it won’t be remembered. 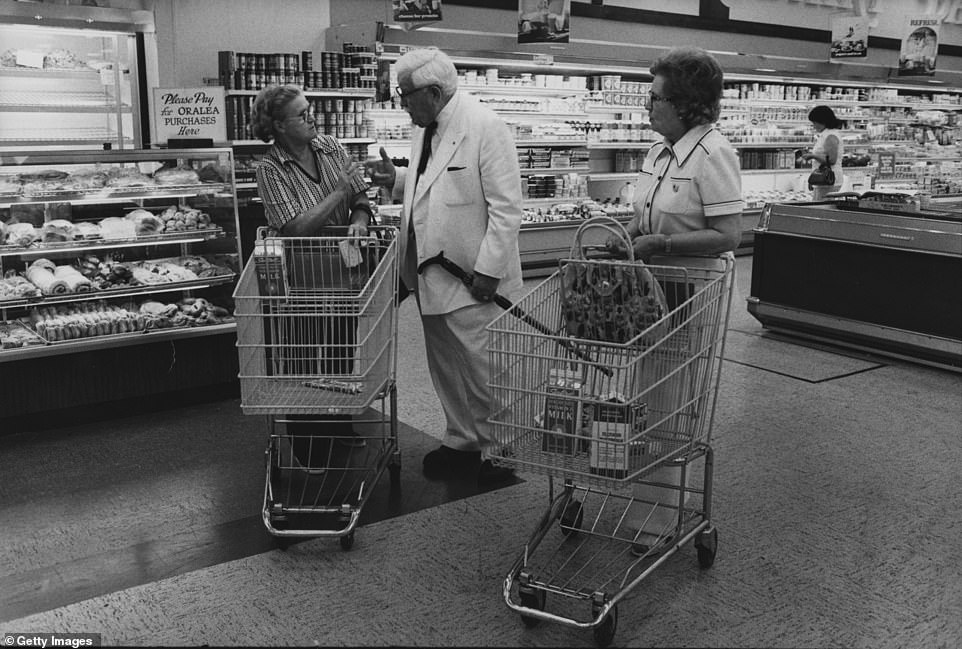 Among the memorabilia is the colonel’s original certificate given to Harland, who later began wearing the white suit and tie (pictured) that would adorn all KFC packaging

Claudia and Harland met in the 1930s while working in his restaurant in Corbin as a waitress. Claudia would become an important part of the brand, even packaging foods and spices to send to franchises while Harland sold the brand.

They sold the restaurant to Tommy and Cherry in 1974, six years before Harland died in December 1980. Claudia died 16 years later in 1996.

However, even after selling the business, the couple still actively promoted the brand, traveling the world in their signature white suit and pre-war dress.

Our bodies, our societies and our planet are inflamed for the same reasons.