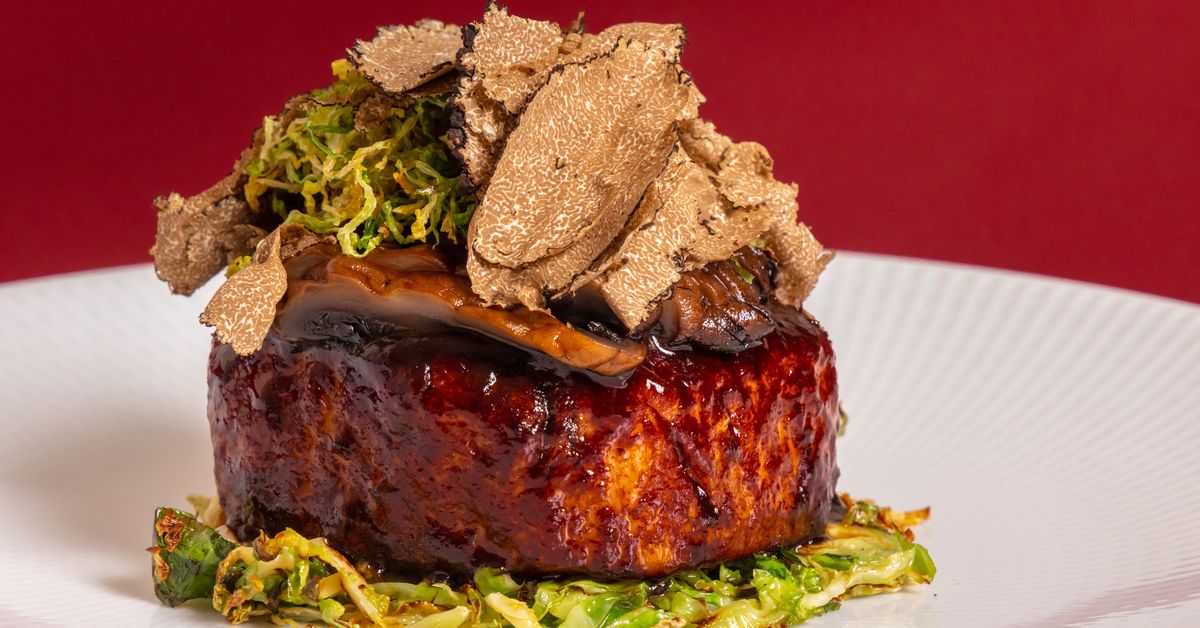 What do devoted diners want to eat at revered fine dining restaurant Gotham? The answer was first defined by Chef Alfred Portale, who established the restaurant’s revolutionary approach to fine dining with sculptural seafood towers, rack of lamb feasts and an architectural tuna tartare that has become a cult favorite among legions of regulars. In 2019, the question was posed to Michelin-starred chef Victoria Blamey, who tore up Portale’s rulebook and tried to reimagine a Gotham built for the 21st century, with varying degrees of success.

Now, the nearly 40-year-old gastronomic institution – resuscitated after an initial blow as one of New York’s first major restaurant closings during the pandemic – is in the hands of 10-year Gotham veteran Ron Paprocki, the former pastry chef of the restaurant and the chef of Gotham Chocolates. On November 9, just two years after its first major overhaul, Gotham unveils its second reboot in its same location at 12 East 12th Street near University Place in Union Square.

The latest reincarnation is another attempt at modernizing Gotham, but with less fireworks and smoother nudges. The acclaimed restaurant, which the New York Times awarded six three-star reviews under five different reviews, has a new owner for Bret Csencsitz, former managing director and managing partner of the restaurant. He and Paprocki have studied Gotham’s restaurants for decades. The knowledge bank they’ve accumulated about restaurant patrons – such a vital force in Gotham that they seem to be both restaurant owners and actual owners – informs what buttons will and will not be pressed when this happens. . to guide the restaurant into the future.

Instead of throwing away Gotham’s glorified yet staid menu like Blamey did, Paprocki’s menu is crisscrossed with nods to familiar Portale-era dishes. A tuna tartare is making a comeback, revisited with a ginger-yuzu vinaigrette and served with gluten-free togarashi crackers instead of its old side of toasted sourdough baguette. The decision was supported by a lot of informal restaurant research: Paprocki’s pastry station was located right next to the pantry, or cold station, in Gotham’s kitchen, he says. He observed for years during Portale’s reign that diners asked for orders of gluten-free tuna tartare and the kitchen changed the dish by simply removing the bread and sending a mound of solitary tuna.

Other subtle updates include the restaurant’s Niman Ranch dry-aged strip loin steak, now reduced to eight ounces per serving from 12 ounces, and sliced ​​instead of served whole. Bread service is no longer free, as Paprocki works with a much smaller team of eight in the kitchen due to understaffing, he says. Gotham’s kitchen once had 18 employees under Portale.

“It’s kind of my direction now with food, really understanding and seeing the evolution of Gotham from Alfred to Victoria,” says Paprocki. “Now the spotlight is on me. But it’s more about the restaurant and the guests, as opposed to the creativity that I want to be.

The cachet of Paprocki is most evident in dishes like celeriac, a vegan main course that considers the vegetable like a steak, garnished with black truffles and in a sauce in a Bordelaise with cocoa butter. The chef’s take on foie gras – an ingredient used in old Gotham’s menus – is a tasty play on a dessert he created for Blamey’s reboot. Paprocki, who is trained in German pastry, added a dessert to this menu that involved a baumkuchen – a layered German cake – stuffed with hazelnut mousse. From now on, the hazelnut filling has been replaced by a whipped foie gras mousse.

The new baking department is run by the Gramercy Tavern and Hudson Yards alumnus Jessica Lee, and maintains a similar balance between Gotham’s past and present. As a nod to Gotham’s legacy, apple pie, a dessert Paprocki has been praised for in the past, remains as an off-menu special, he says. But Lee reinterpreted a cheesecake for Gotham as a mash sprinkled with dried sunchoke skins and a green apple sorbet on the side.

The restaurant space itself holds the same tension. Csencsitz cut the name of Gotham Bar and Grill to what dozens of regulars already call it: Gotham. The draped and swollen white chandeliers are gone, replaced by fitted horizontal bands of light fabric. The art on the walls of Gotham was entirely in black and white; from now on, more modern and colorful pieces will be offered by companies like Snarkitecture. The steps at the front of the restaurant were removed to make the entrance more accessible, and a lounge was added with a library curated by neighbor and regular customer Nancy Bass Wyden, owner of the nearby bookstore, The Strand.

“We are once again welcoming people who have been coming here for decades,” says Csencsitz. “And we hope that we will also appeal to a new generation. “

Csencsitz and Paprocki aren’t the first to hope for this outcome, but they say watching it unfold once, during Blamey’s tenure – to some critical success and some customer complaints – was a necessary learning experience. “I think it revealed a lot of sensitivity about the greatness of this place to a lot of people,” Paprocki said.

The new executive chef has taken a big stance in the dessert department by removing Gotham’s longtime chocolate cake, but he’s already gearing up for dinner’s comeback. “I’m sure people are going to ask for it,” says Paprocki. “And, you know – I know how to do it.”

Gotham is open Tuesday through Saturday, 5 p.m. to 9 p.m. Reservations are available through OpenTable.

Chamber of Commerce: open markets, restaurants in the Boothbay area