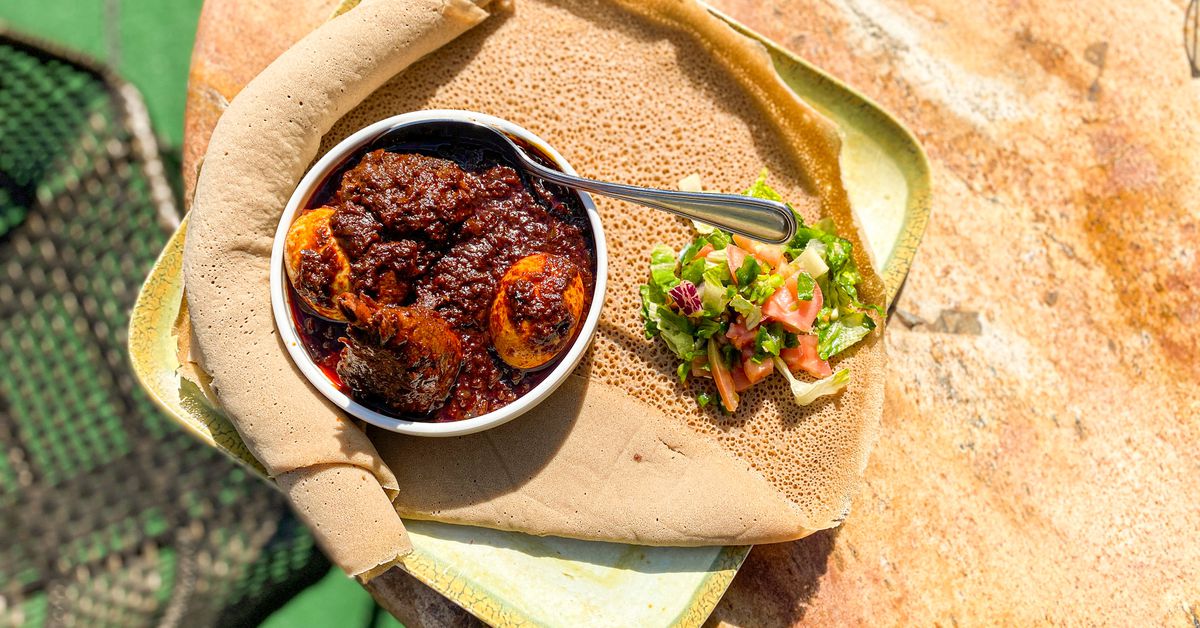 How Inglewood became the center of African cuisine in Los Angeles

In the 1920s, Inglewood was a predominantly white neighborhood, but after new laws were passed illegal housing discrimination (followed by the Watts Riots of 1965), African Americans began to settle in the city as white residents left, forming a predominantly black community. These days, even though the neighborhood is in the process of gentrification, Inglewood’s population is over 40% black. It’s no surprise that more recent African immigrants have also settled in this area, making it home to many African restaurants in Los Angeles beyond Little Ethiopia.

West African food is still largely ignored in the United States outside of the African diaspora, despite a TikTok viral fufu challenge in early 2021 which brought many new customers to local West African restaurants. In Inglewood, it is common to find cuisines from West African countries, such as Nigeria. It’s not just West African food, however, in the region; there are also Ethiopian restaurants, as well as the only Somali restaurant in the Los Angeles area. At Inglewood’s African restaurants, you can trace how rice and beans, a staple of many cultures in the Americas, developed in regions across Africa and, at the same time, how colonization has impacted Somali cuisine, apparent in dishes like spaghetti topped with suugo suqaar and its common companion: the banana. Below are five African restaurants to try when exploring the food scene in Inglewood.

Aduke opened in Los Angeles just three years ago, quickly winning over critics and fans with its smoky jollof rice and creamy egusi stew. They also offer harder-to-find Nigerian dishes like asaro, mashed yam cooked in tomato sauce, served with your choice of meat and spinach. Different types of swallows – the ball of starch that West Africans eat with their stews – are available here, from the more common fufu, made from yams, to semo, made from semolina flour. 1117 W. Manchester Boulevard Suite #C, Inglewood, 90301, (213) 261-0737

Going to Banadir, the only Somali restaurant in Los Angeles, is like stepping into a hub for the local Somali community, where friends and family enjoy large plates of slow-roasted goat meat served with rice basmati and salad. Don’t miss the bas bas sauce with cilantro and jalapeno. Breakfast showcases Somalia’s different cultural influences, with Italian-influenced suqar (stir-fried meat) served with anjera, a flatbread similar to Ethiopian injera. 137 Arbor Vitae Street, Inglewood, 90301, (310) 419-9900

Before opening her restaurant, Emma worked in Little Ethiopia, but as many Ethiopians live in Inglewood, including Emma herself, she decided to serve this community. The sweet and spicy wot doro, simmered for more than four hours, is served with homemade fresh cheese. His chewy injera, fermented for three days, is perfect for scooping up the thick, spicy chickpea stew called shiro. Finish the meal with the traditional coffee service. Bonus: Emma Habesha has a great outdoor dining area. 726 N. La Brea Ave, Inglewood, 90302, (424) 331-5650

Veronica Shoyinka has been serving the Nigerian community around Los Angeles for 30 years at her restaurant, nicknamed “The FuFu Land”. Those who have never tried Nigerian cuisine may find that pounded yam tastes more familiar than cassava-based fufu. It is served with one of three stews: egusi (spinach and pumpkin seeds), ogbono made from okra, and edikanikon – a stew usually made with Nigerian greens, but made here with spinach. All stews, as well as jollof rice served with red stew, can be served with a choice of meat, including fried fish or goat. 401 E. Hillcrest Boulevard, Inglewood, 90301, (310) 673-4890

Airport Royal Cuisine is the only restaurant in Los Angeles to serve Ghanaian food, which shares similarities with Nigerian – jollof rice is enjoyed in both countries, and both cuisines offer starchy swallows served with various stews. In Ghana, fufu is usually a mixture of cassava and another ingredient; at Royal Airport, fufu is made with plantains and served with a tomato-based soup called light soup. One of the most popular dishes, both in Ghana and at this restaurant, is waakye, a dish of rice and beans cooked with dried red sorghum and topped with shito, a savory and mildly spiced shrimp and herring paste. . 4952 W. Century Boulevard, Inglewood, 90304, (562) 413-2294