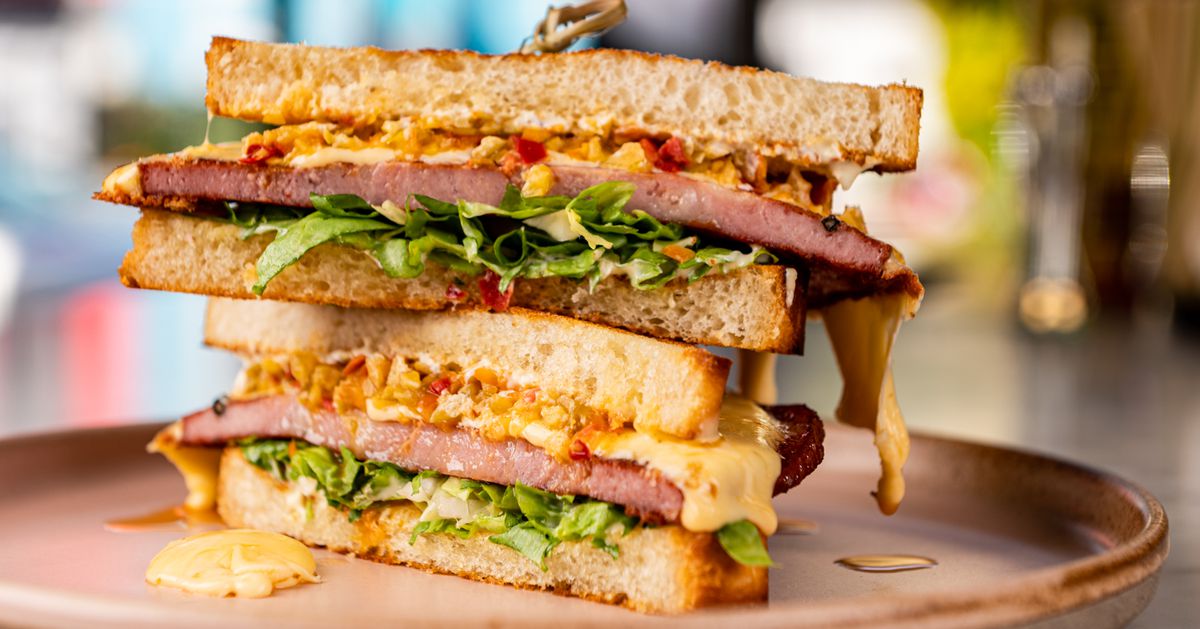 Some dining experiences just can’t be squeezed into one concise sentence – that’s the case with biting into Buddy’s fried bologna sandwich, the new restaurant and bar Mission. Inside, engulfed in a solidified, crispy layer of American cheese and punched with escarole, pickled cherry peppers and dijonaise, the bologna – normally thinly sliced ​​and eclipsed by prosciutto on your regular charcuterie plate – becomes a smoked, pillow revelation.

Thick cut and fried to perfection or piled high on a plate, bologna is having a Bay Area moment. In addition to creating Buddy, he toured town everywhere from pizzerias to delis. While the obvious vehicle is the sandwich – at Newkirk, the California Chrome pairs it with chipotle aioli and grilled kale and at Palm City, the paper-thin mortadella mixes with arugula and nduja mayonnaise. – he also lent his genius to other mediums. More versatile than ever, it has been used to enhance the occasional salad or perfect an appetizer, as a pizza topping and breakfast enhancer.

Salad is usually made with Spam; the earthiness of the snails pairs well with its salty richness, Lee says, but in Queens, Lee and co-owner Eddo Kim decided to go with Dorsia Provisions mortadella. “Our snails and mortadella are very high quality imported products from France and Italy, so the flavors are particularly spectacular,” says Lee.

“I don’t think a lot of people have ever given mortadella a chance in the past. In the present, people find velvety pink meat sheets particularly Instagrammable.

At the Valley Bar and Bottle in Sonoma, mortadella makes a few appearances. For dinner, the menu simply says “mortadella” and if you order it, a plate of slices will arrive. For lunch and brunch, it’s a bologna sandwich on potato bread with aioli and a spicy relish. “Bologna is something that bonded us when we first met, and we’ve since eaten it together memorably on vacations in New York and Italy,” says co-owner Emma Lipp, referring to Stephanie Reagor, his partner in life and in business (Valle’s other co-owners are Lauren Feldman and Tanner Walle). “The texture is so delicious.”

For Buddy’s chef, Sean Thomas, creating the iconic sandwich was like “closing the loop.” Thomas used to serve an appetizer of bologna, fondue, and fried bread at the Blue Plate back in the day. Most customers, he says, “are familiar with mortadella or discovered it by realizing, ‘Oh, that’s fancy bolognese.

To claim that bologna is a hot new item would, of course, be naïve. Its humble cousin, Bologna, has been oddly trending on social media lately as a face mask courtesy of Oscar Mayer, but that alone couldn’t explain its popularity on the local food scene – isn’t it? it not? “We’ve noticed an increase in bologna in the contemporary food scene in general,” says Valley’s Emma Lipp. “Maybe millennial pink has something to do with it?” And it is beautiful, like terrazzo marble.

Beyond the meat’s sudden aesthetic relevance, for some it’s about nostalgia – or rather the opportunity to give the beloved product the attention it has always deserved. “I think a lot of people never gave bologna a chance in the past,” Lee says. “In the present, people find velvety pink meat sheets particularly Instagrammable. And so in the Bay Area, where chefs are particularly focused on sourcing, storytelling, and sharing great ingredients, it’s exciting to be able to put bologna on a menu and know people will be thrilled to try it.

The less romantic answer to the mystery: The Bay Area has always been home to excellent artisanal mortadella, and it’s time for the next generation of chefs to rediscover it. “We end up with some commonalities in this town, because we buy from the same vendors,” says Thomas, who had tasted local mortadelas from Molinari and Fra’ Mani, before settling on foreigner – Olympia Provisions de l’ ‘Oregon, chosen for its flavor and perfect size, suitable for the sandwich. “I’m always baffled by what becomes a trend and why. Mortadella would be more unlikely.

The easiest loans to get