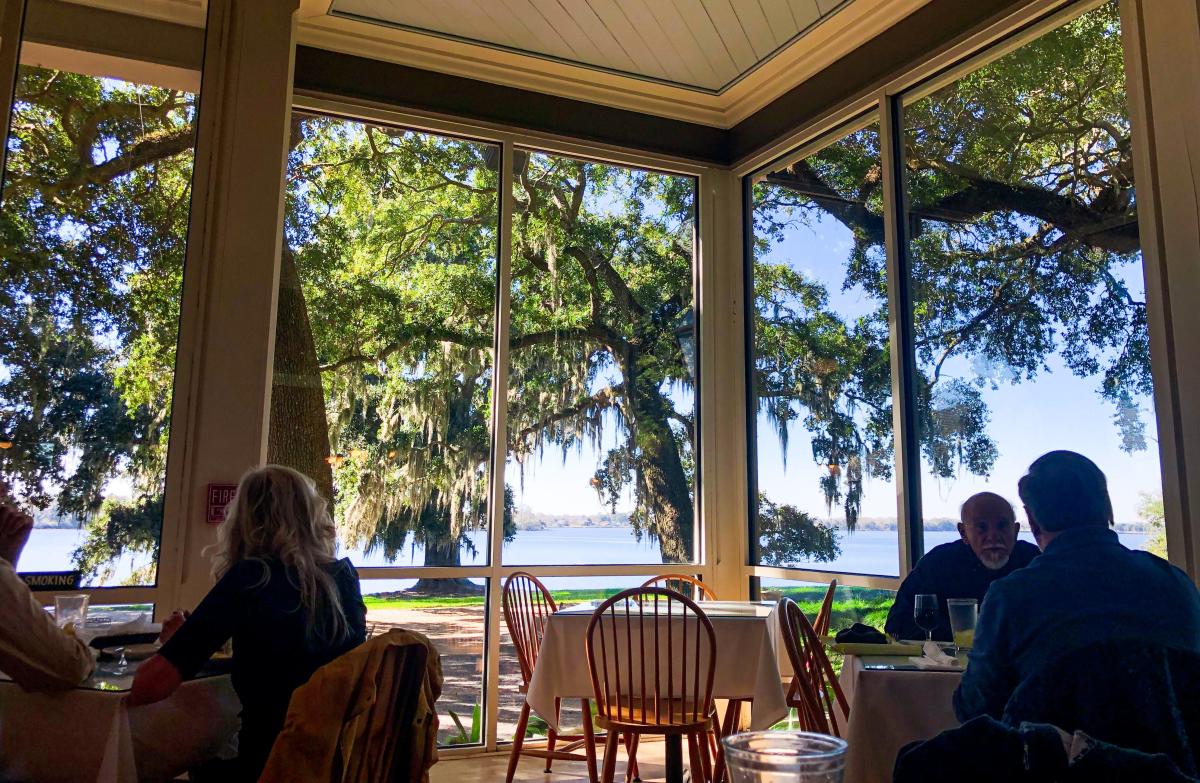 If you are looking for a day trip, Rip Van Winkle Gardens in New Iberia offers lunch under century-old oaks and the chance to walk with peacocks.

The gardens, found on Jefferson Island, are where stage and silent film actor Joseph Jefferson built his Victorian-style hunting lodge in 1870. Jefferson performed the role of Rip Van Winkle more than 4,500 times on stage, which is why or how the gardens earned their name.

Now let’s talk about food. The property also houses Jefferson Coffee, a midday restaurant that has been part of the garden’s operations since the 1980s. The cafe is open from 11 a.m. to 2:30 p.m. on weekdays and from 11 a.m. to 3 p.m. on Saturdays and Sundays. The menu consists of salads, sandwiches, dishes and desserts. The café has large windows in part of its dining room, offering a lovely view of the oak trees, Lac Peigneur and wandering peacocks.

I had the Chick-A-Lada, a sandwich made with marinated chicken, lettuce, tomatoes, chipotle mustard and mayonnaise served on crispy Muffuletta bread. I had the quarter size portion ($8), but you can also get the half and full size sandwich. The menu doesn’t say so, at least from what I could tell, but the sandwich comes with a heap of classic frilled potato chips and a spear of dill pickle. For me it was perfect. It was the right amount of food and the sandwich was filling without being heavy.

My boyfriend ordered the Italian hero, another sandwich on muffuletta bread, stuffed with salami, pepperoni, bologna, swiss, provolone, mozzarella cheese and pepperoncini peppers with marina sauce. He had the half portion ($14), and it also came with fries and a pickle spear. With a quick keyword search on the Rip Van Winkle Gardens Facebook page, this sandwich appears to be one of the cafe’s new menu items, having been mentioned in one of its posts from November.

Now, when your meal is finished, your server will ask you if you would like coffee or dessert. Say yes.

We didn’t have coffee, but we shared a slice of white chocolate bread pudding ($7). It was everything I hoped for and was served piping hot. Now, if you’re not the bread pudding type, no worries. The cafe also offers tempting sweets such as creme brulee cheesecake, melted chocolate lava cake, and bourbon pecan pie.

It didn’t seem necessary to buy tickets to visit the garden or the house to dine in the cafe. However, if you like to wander around after a meal like me, you might want to consider getting at least one ticket to the gardens.

There are at least 50 peacocks on the property – that’s what the attendant at the entrance told me anyway. I was also told that they were friendly. So don’t worry if you come across one, two or three wandering around as you stroll through the gardens. I will say that I saw at least one peacock before parking the car and two more on my way to the cafe. On our walk through the garden, we easily saw 10 more. So yes. Lots of birds.

— Emily Finallyger is a reporter for The Courier and the Daily Comet. Follow her on Twitter at @EmilyEnfinger. Email Emily at [email protected]

This article originally appeared on The Courier: Rip Van Winkle Gardens serves lunches and walks in the garden with peacocks

A restaurant with tasting menu turns into a multimedia art gallery

‘We had no idea’: Why most St. Paul diners won’t need to show their COVID vaccination status – WCCO