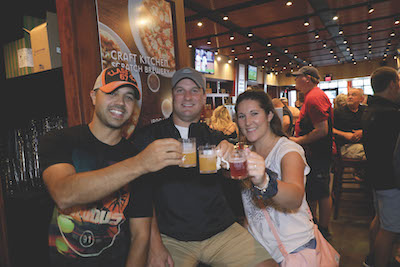 The 18th annual festival, presented by Chase Bank, will take place on Saturday, July 30, from noon to 7 p.m. at 12 locations scattered throughout Newark’s central business district.

“The Newark Partnership is thrilled to sponsor Newark Food & Brew for 2022,” said Leann Moore, executive director of the partnership. “From neighborhood staples to Delaware favorites and a few new spots, there’s something for everyone this year. Also be sure to stop by and shop at our local retailers.”

Food and Brew features over 40 craft and imported beers paired with food offerings from 11 Newark restaurants as well as craft beer retailer The Delaware Growler. This is a paid event that takes place in restaurants. In addition to food and drink, a collection of Newark retailers will be offering discounts during the festival as part of the Hops & Shops sidewalk sale.

“Newark Food & Brew has become a rite of summer,” said Jerry duPhily, publisher of Out & About Magazine, event sponsor “When we partnered with the City of Newark to create this event over 18 years ago, craft beer-focused events were a novelty. Today they are commonplace. But the beauty of this event is that it encourages guests to explore Newark and visit the many participating restaurants. It is an ideal showcase for the city’s food scene.

For a full list of participating restaurants, featured beers and menus, visit Newarkfoodanbrewfeset.com.

Peri-Peri chicken is back in the Stanton-Christiana area.

Peri-Peri is a spicy form of grilled chicken that originates from a region of Africa that was once part of the Portuguese Empire.

A franchise that later left the United States opened a location in Pike Creek in 2015. The restaurant reopened under a different name, but then closed.

Nando’s, a large chain specializing in Peri-Peri has a stronghold in the Washington, DC area, but hasn’t made inroads in the north and east.

Northern Delaware once saw a Peruvian chicken boom, but there’s only one location left for the longtime Chicken House, which previously closed locations in Middletown and north Wilmington. Pachamama at the Riverfront Market in Wilmington also offers roast chicken

The latest chicken dish to make a splash is Korean Fried Chicken, with the Bon Chon chain opening a franchise in Newark and the barbecue chain set to open on South Main Street.

Speaking of Korean food, a short hop from Fuego off Churchmans Road, work is underway on a location for KPot, a chain specializing in all you can eat Korean BBQ and Hot Pot. You also grill thin strips of meat to your liking.

Renovations are underway at the former Fuddruckers, Cheesburger in Paradise, and Chi-Chi’s across from Delaware Tech-Stanton.

The all you can eat feature comes with a two hour limit and an extra charge if the food is wasted.

KPot has nine locations, but is expanding its footprint which includes restaurants already open in the Philadelphia area.

Delaware is home to nine winning restaurants that received Wine Spectator honors for their wine programs.

Rehoboth-based SoDel Concepts accounted for about half of restaurants recognized for their wine list. SoDel frequently hosts wine dinners at its restaurant in the coastal county of Sussex.