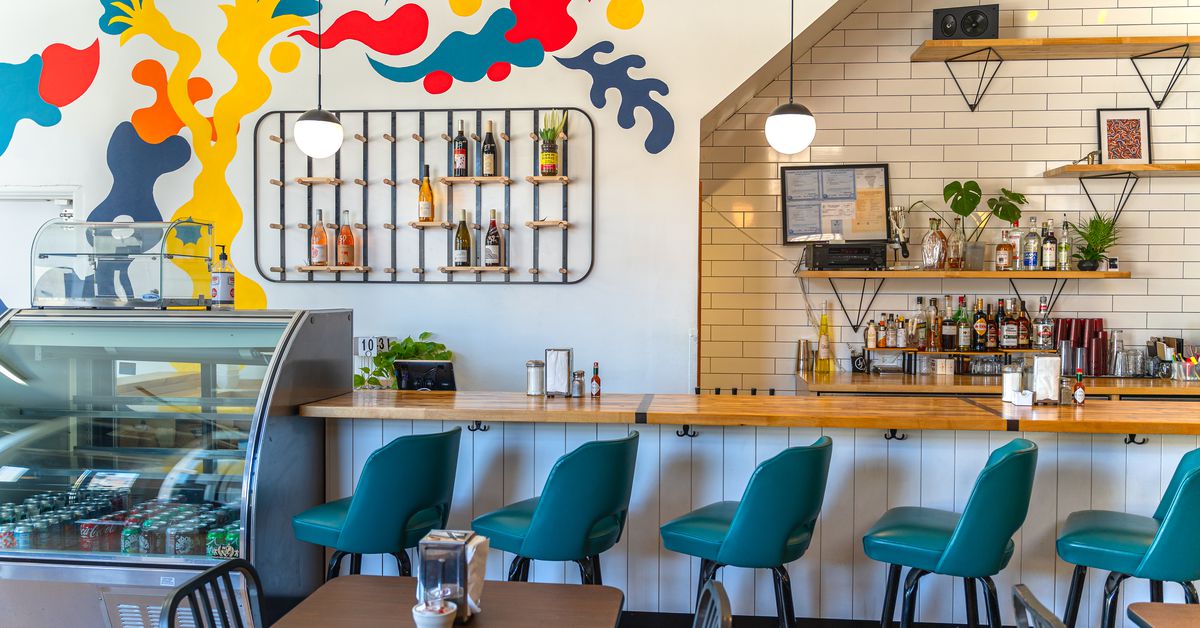 After more than two years of battling the challenges of the pandemic as a modern Jewish deli Jeff & Judes, the space at 1024 N. Western Avenue in the Ukrainian Village was ripe for a renovation. So on Saturday, July 16, the corner of Western Avenue and Cortez Street finalized its Do-Over Diner transformation, launching with cocktails, all-day breakfast, and late-night hours.

The greasy-spoon dinner culture played a big part in the early dining memories of executive chef Hanna Coleman (Floriole, Café Marie-Jeanne) and beverage director Sam Yar. They hope to recreate the same joy and excitement they enjoyed in their youth. A lifelong baker in Chicago, Coleman worked at Jeff & Judes as a bakery and deli manager; Yar founded the Hotel Robey bar program in 2016 and spent three and a half years working his way up the ranks at the southern German beer hall of Funkenhausen.

“My family wasn’t rich or anything, so the dinner parties were our treat,” says Yar, who was born in busy New Jersey and moved with his family to suburban Milwaukee as a child. . “I have a really tight feeling with diners – they just hit differently for me. It’s an inner feeling of peace and comfort that I think really drives what we’re trying to push here at Do-Over. .we don’t go for Alinea, we go for comfort and joy.

Do-Over marries restaurant classics with a fun and energetic aesthetic.

Do-Over embraces the qualities that have made the revered American diner with a comfortable, no-frills atmosphere featuring reliable, affordable, and nostalgic dishes, from grilled mashed burgers and patty melts to hash browns and fried pickles.

Coleman, from the suburb of Waukegan, also associated diners with special occasions in his youth. “There’s a place called Full Moon, it’s a truck stop where we used to go to school after dances or late at night,” she said. “It feels like a very Midwestern memory to me – the excitement when you get there, it was such a treat.”

Despite this devotion to the classic diner ethos, the mere existence of Do-Over’s beverage director role (not to mention his liquor license) sets him apart from many of Chicago’s greasy spoons. Still, Yar hasn’t strayed from his quest for simplicity with options like a lavender vodka soda with a lavender salt rim and his Old Fashioned version, tweaked with amaro and falernum for added luminosity. . It also offers many beers, ranging from local craft beers to inexpensive beers like PBR and Old Style.

“We think it fills a void in the region,” Yar says. “There are many places [nearby] who have no food, so you can come here and fill your belly very well. The greasy spoon is the best drunk food, in my opinion, but that doesn’t mean we have to drink garbage.

The restaurant’s bones, which before Jeff & Judes housed the prison-themed burger spot Lockdown Bar & Grill, haven’t changed much in the weeks since the deli closed, but owner Ursula Siker has made some design changes to imbue the light dinner. vibes. Chicago artist Garrett Lawrence created indoor and outdoor murals with playful, abstract pops of color, and Siker added a pergola to cover a sidewalk patio that seats 20 to 30 people. She also squeezed two additional tables inside, bringing the interior capacity to a total of 36 seats. “Jeff & Judes was more of a clean, bright and airy space, but since we’re open late now, we wanted something more playful and welcoming,” says Siker.

Check out Do-Over Diner’s new style and menu in the photos below.

A new pergola will protect outdoor guests from bad weather.

Outgoing? Get rid of these types of debt immediately