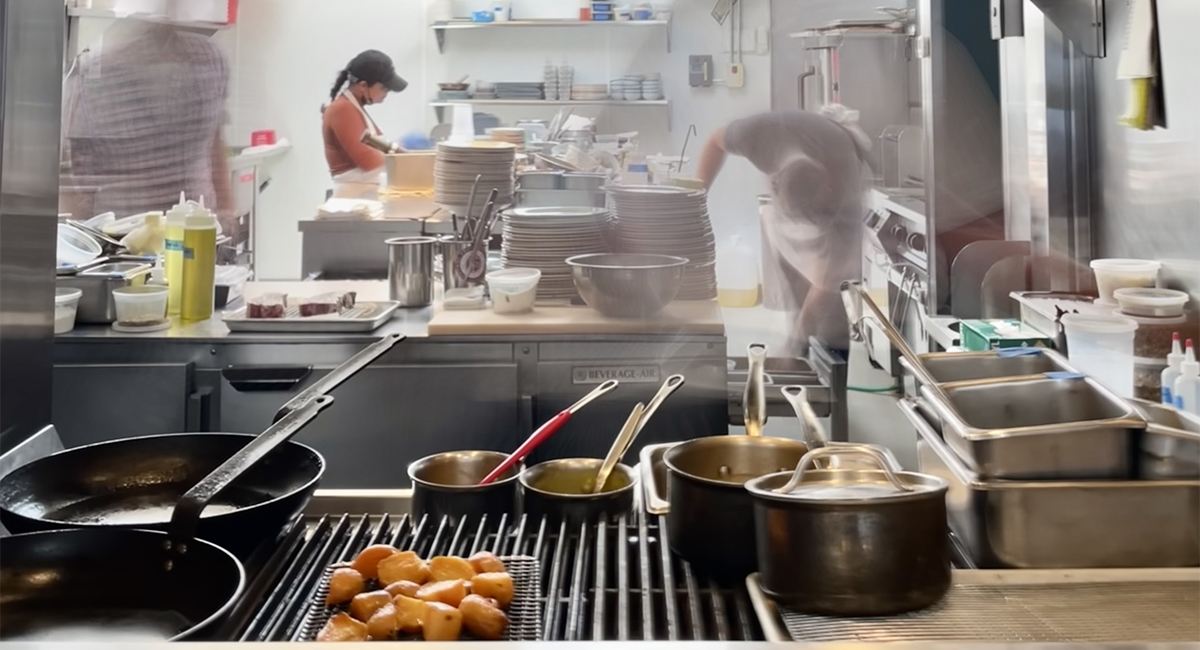 The neighborhood restaurant and raw bar is Giulia’s sibling and is now open for dinner Wednesday through Saturday, with more nights to come.

For Michael Pagliarini, the Best of Boston award-winning chef behind Italian gem Giulia, cooking is about making the most of the ingredients you have. So the launch of his seafood restaurant and raw bar Moëca on August 3, at the height of the New England fishing season, was nothing short of delightful. “We’re just living in the moment,” the chef says, “and the striped bass season going on right now is one of the best in recent memory.”

Pagliarini, who co-owns his restaurants with his wife Pamela Ralston, has been cooking in Boston for 20 years and says the local striped bass is an annual treat. Diners will see this prized summer fish on Moëca’s opening menu two ways: raw, in ceviche with stone fruit aguachile and a crispy squid ink “chicharron” made with tapioca. for dipping, and also as a grilled starter with courgettes, tomatoes and a seaweed vinaigrette.

As the menu and operations grow in the new restaurant, some seasonal fish will be used even more. Chef Brian Gianpoalo envisions, for example, a large dish of roasted striped bass head presented with pancakes, herbs and sauces for diners to make homemade bites at the table. “The menu is going to be lively and nimble,” says Pagliarini. And adapting to what’s available doesn’t just apply to the best daily shots. “You can’t choose the top of the food chain and make it a model of sustainability,” he adds.

This is actually the philosophy behind the name of the restaurant. Moëca is an Italian colloquialism for a small green crab that is both a delicacy in Venice and an invasive nuisance to New England fisheries. These tiny, prolific creatures eat clams and oysters, compete with native shellfish for food, and destroy local marsh habitats — and they’re becoming even more abundant in the northeast as ocean temperatures rise.

A number of local non-profit association and research organizations have been working with Boston-area seafood distributors and chefs for years to educate diners about these invasive green crabs and market them as a sustainable and tasty shellfish option. Pagliarini got involved in 2019 with his team at the Benedetto, the upscale restaurant of the Charles Hotel, in collaboration with the Green Crab Project and the Venetian fisherman Paolo Tagliapietro. “I remember being given a 30-pound bag and opening it up to fierce, determined little crabs that wanted to run all over the kitchen,” Pagliarini recalls. “Green crabs are not easy to work with,” he continues, noting that they yield very little meat. The flavor is strong, however, many local chefs use them to infuse sauces, soups, stews and even a whiskey. To start, Moëca offers green crabs in a tasty steamed egg custard topped with wild shiitake Martha’s Vineyard Mushroomscorn and green onion.

It’s a dish worthily refined for an ingredient that represents the business model. After Benedetto closed during the pandemic, “the idea of ​​a seafood restaurant really took hold,” says Pagliarini. It is Tagliapietro, the fisherman, who suggests naming the new spot Moëca. “He said to me, ‘I have a lot of respect for these crabs. They are resilient, adaptable, determined and ready to take on any challenge. I thought coming out of the pandemic is what we all need to be,” the chef says.

Designing a new restaurant in the past year has actually been “rejuvenating,” says Pagliarini. On the one hand, it provides new opportunities for team members like head chef Gianpoalo, who opened Giulia as a sous chef 10 years ago, and Best of Boston-winning pastry chef Renae Connolly. , Pagliarini’s first hire for Benedetto. Connolly now runs the dessert programs at both Giulia and Moëca, overseeing the production of gelato and ice cream and more, headquartered in the basement kitchen of the new restaurant.

To speak through Moëca opening of the cocktail menu With Beverage Director Charlie Coykendall at the Philosophical Wax on Hospitality with General Manager Lauren Faria, Pagliarini says he was inspired by the creative processes of his managers. They also hired a handful of new employees. “It’s exciting to see all these people who have been with us for a long time stepping up to the next level and becoming mentors,” says Pagliarini.

Seeing the restaurant itself come together was also energizing for the chef-owner. Moëca replaces a longtime neighborhood spot with an edgy color palette of watercolor grays, blues, and oxidized metals. Collaborating with the interior designers at Wolf in Sheep Design to reinvent what was more recently a pizzeria called Luce, and formerly Shepard and Chez Henri, was a “dynamic” process. Carpenter Thom Scott built arches for the back bar, cantilevered shelving that separates the bar from the dining area, and other custom features. A wall of windows at the front of the restaurant, meanwhile, lets in lots of natural light, which spills over the corona marble chairs, banquettes and tables. Towards the rear of the restaurant are more comfortable and private cabins, as well as a large wooden table that seats six to eight people in front of the open galley.

No matter where you sit, “you really feel connected to the whole room,” observes Pagliarini. And when sustainable, seasonal seafood hits the table, you might feel like you’re part of something bigger. 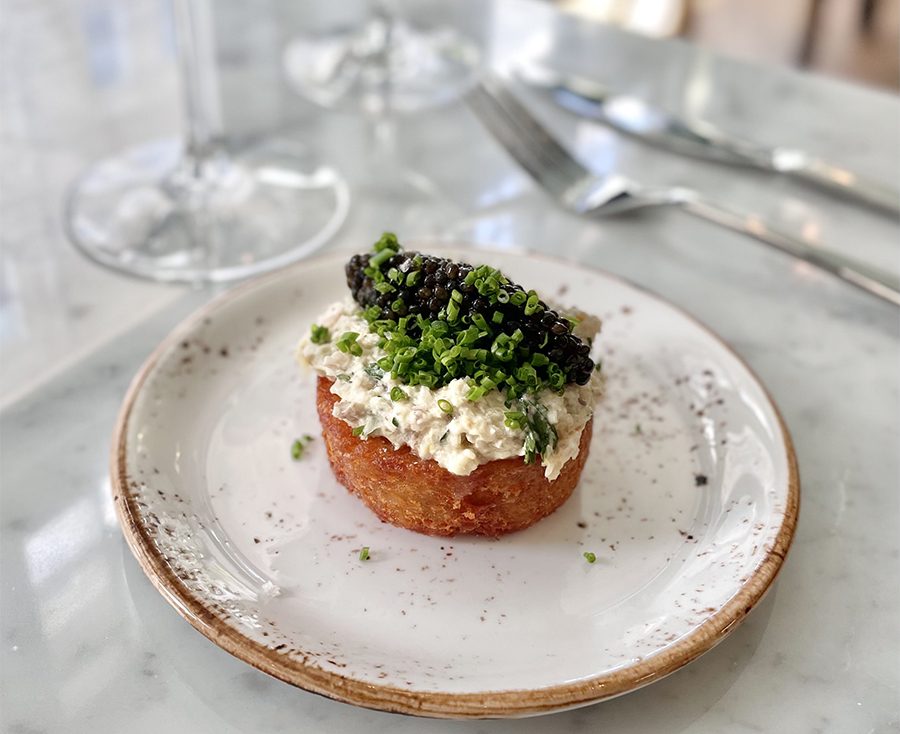 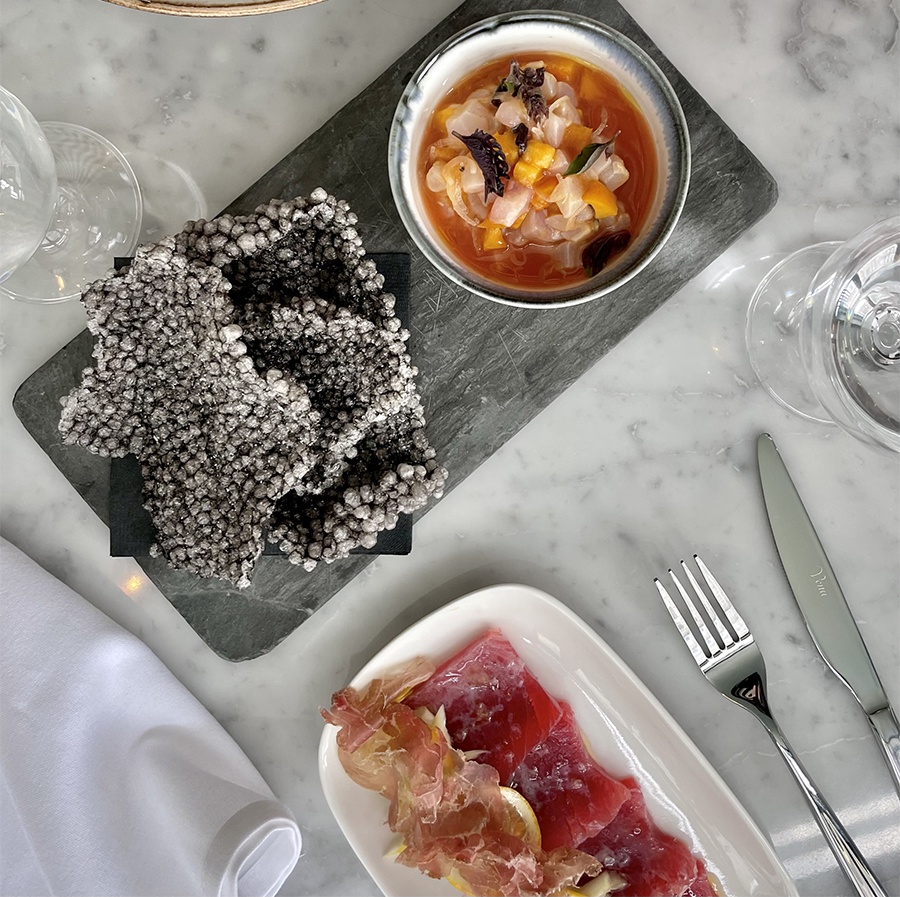 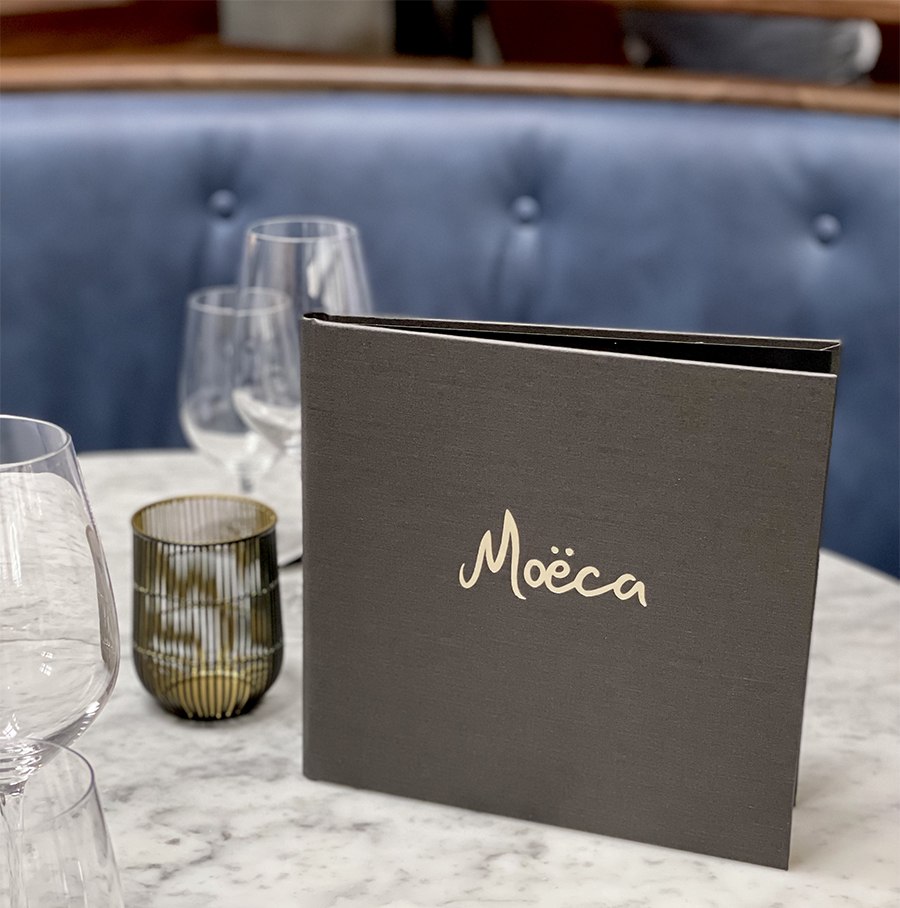