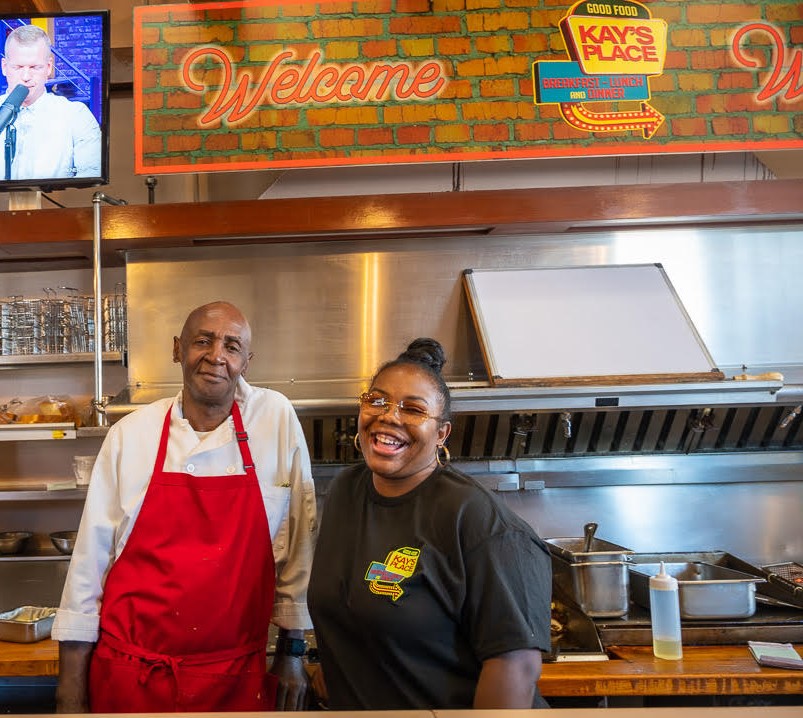 At Kay’s Place, the comfort food and civic vibe of the new Wyman Park restaurant continues

Gyroscopes are gone, but lake trout have been added to the map. The booths and the counter are the same. A row of new flat-screen TVs hangs over the grill, as if whatever the talking heads are talking about is more important than what the bus driver for an egg sandwich tells the teacher on the next stool.

Best of all, “His Royal Grillness” – “Mr. Bruce,” the King with his spatula scepter, is back on the short order line, producing homemade pancakes, omelets and fries.

All is well again at the corner of Howard and 25th streets in North Baltimore, where, just before Thanksgiving last year, the New Wyman Park restaurant closed after 80 years. In early October, a new owner lit the stoves and made their debut under the name Kay’s Place.

“I see new faces but my old customers are coming back,” said cook Bruce Purnell, 70, a two-decade New Wyman veteran when he was part of Spiro Conits, who stopped to take a look. eye to his former lair the other. daytime.

One of the new faces learning the dinner trade is the waitress and Daphney Jones who graduated from the Southwestern High School class of ’85. When asked what was the most difficult part of his job, Jones replied, “dealing with Bruce”.

They both laughed and got back to work, Jones writing the tickets and Purnell placing them over the grill in the order they came in: waffles, shrimp and oatmeal, and the all-purpose egg sandwich with Full strips of bacon hanging over the side.

The owner is Cia Carter, 36, the chef / entrepreneur behind the Miss Carter’s Kitchen restaurants in downtown Clay and Liberty Streets (undergoing renovations) and on Edmondson Avenue. Kay’s Place is named after Carter’s financial and business partner Kevin Maultsby, 45.

“He knew the history of this place,” Carter said. “He knew they were doing good business. People came out of nowhere when we opened. Some of them phoned to tell people that the place was open again. “

Like many restaurant owners, Carter does business from a booth in the back. “I try to make my presence known every day,” she said. With her sleeves rolled up as she flips through the paperwork, a cursive tattoo of the word “Loyalty” is visible on the inside of her left arm.

“Loyalty to myself,” she explained, “and the people I love.”