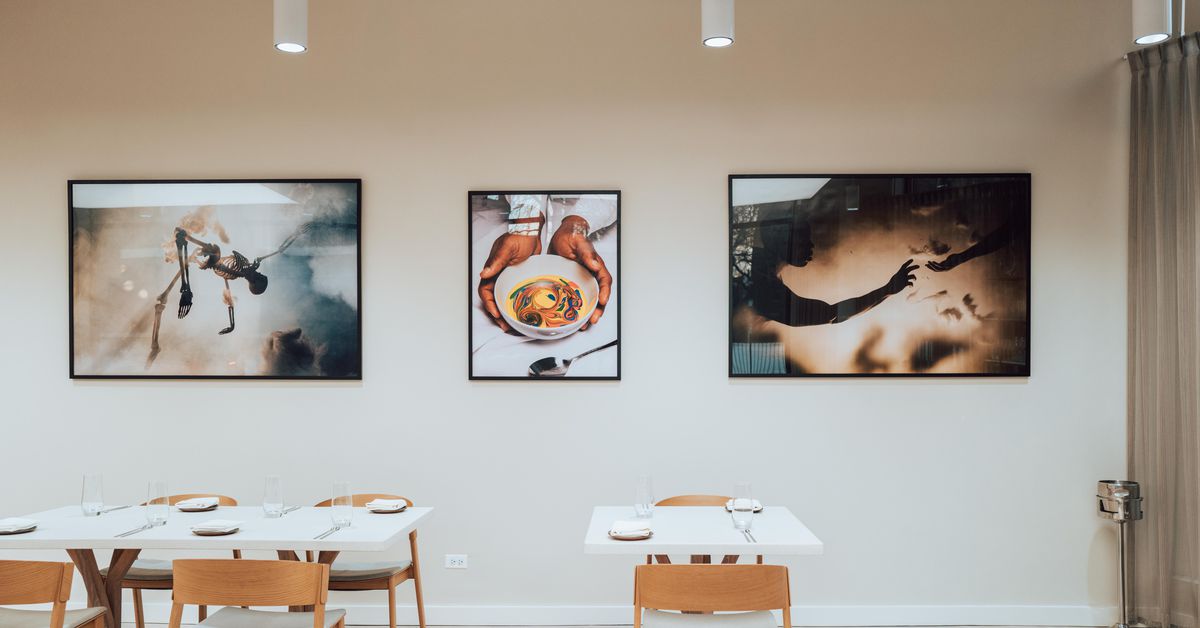 A restaurant with tasting menu turns into a multimedia art gallery

When Katrina Bravo and Jenner Tomaska ​​opened Esmé, their tasting menu restaurant in Lincoln Park, last fall, it wouldn’t be, Bravo says, “about us.” Instead, they imagined it as a gallery that would showcase the work of all kinds of artists, not just Tomaska ​​and her team in the kitchen, but also the painters and photographers whose work is on the walls and the ceramists who make the plates and bowls. Eventually, they planned collaborations that would combine food and art into one meal.

Now that the first meal has arrived, a 12-course dinner titled “Particular Contrast, Perfect Light,” inspired by 12 works by Chicago-based photographer and videographer (and Eye Eaters co-founder) Paul Octavious. Tomaska ​​and Octavious had developed a mutual admiration for each other’s work after meeting at an Alinea Group dinner in 2016 when Tomaska ​​was executive chef at Next; it eventually turned into a friendship. Three years later, when Tomaska ​​and Bravo conceived the idea of ​​art-based dinners at their next restaurant, they knew exactly who they would call. “Paul was always going to be first,” Tomaska ​​says, “whether he liked it or not.”

The project was delayed for various reasons, most of them pandemic-related, but the dinner menu finally launched on January 7 and will run until April 1 (with a break for Valentine’s Day). Tickets are $250; a portion of that will go to Hugsnoslugs, a nonprofit founded by Aleta Clark, also known as Englewood Barbie, which, as Octavious puts it, “helps black people feed themselves.” Virgil Abloh, the artist and fashion designer who died in December and whose work Octavious admires – the title of the dinner is a nod to one of his projects – was a major donor. Turns out, Tomaska ​​also volunteered with Hugsnoslugs at the start of the pandemic.

Some of the dishes, Tomaska ​​says, are literal representations of Octavious’s work. Others are based on conversations where Octavious explained what he was thinking while taking the photos. Not all of the photos will be displayed in the restaurant due to lack of space, but they will all be available for consultation online. (It will also keep diners from hovering over strangers’ shoulders while they try to eat.)

Three of the dishes, for example, are based on three photos from Octavious’s image series of Cricket Hill at Montrose Beach near his home in Uptown. For more than 11 years, Octavious has been fascinated by the 48-foot-high hill built from the remains of earth from a construction project and photographing it twice a week, in all seasons, to show the passage of time. Tomaska ​​prepares the same ingredient – beets – three different ways and serves it three times on the same plate.

“In a tasting menu,” he says, “you never want to feature an ingredient multiple times. You never use the same plate multiple times. Being able to break this rule was really fun.

For another course, Tomaska ​​snapped a shot of a white bowl filled with swirls of color – inspired, Octavious says, by an imaginary feast in the film. To hang up — and interpreted it as a kind of snow cone made of whipped cheese covered with a white champagne and an apple granita. The dish is served in a glass bowl created by Aron Fischer, who designs most of Esmé’s dishes; it looks pristine and colorless until diners add the accompanying flavored syrups to make it look like Octavious’s photo.

All of Octavious’s work will be available for purchase, either framed and directly on the wall or in large or small print, although they will not be delivered until after the dinner/show closes.

Bravo and Tomaska ​​hope this will be the first of many collaborations between Esmé and the city’s artists and nonprofits. “Our intention is to bring joy to people,” Bravo says, “and to let the people who dine with us know that we’re giving back to the city of Chicago.”