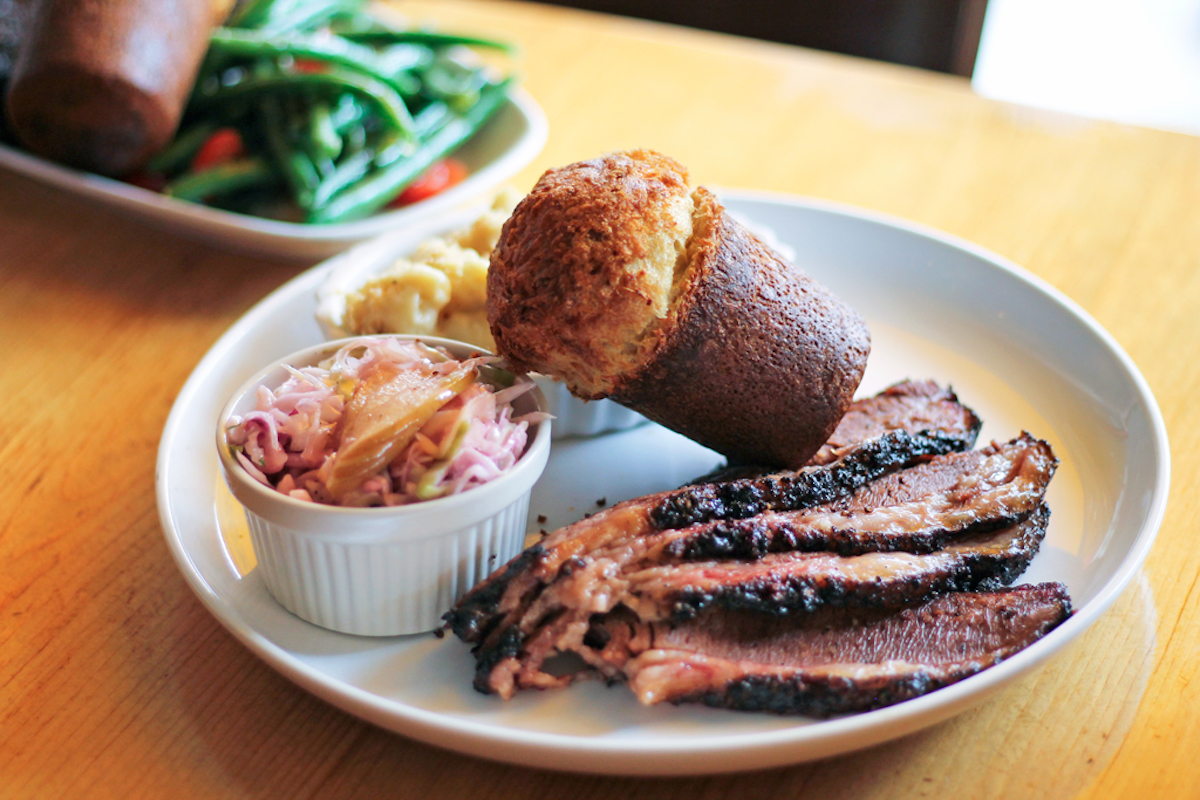 9 delicious restaurants to try in Saint-Louis

From the popularization of American favorites like hamburgers, ice cream cones and Dr. Pepper at the 1904 World’s Fair to a current dining scene partially shaped by Vietnamese and Bosnian refugees starting new lives, St. Louis is a delicious midwestern destination. From foods invented in St. Louis to popular dishes from the homelands of those who resettled here, you’ll want to try these delicious eateries when visiting St. Louis.

Note: some of my experiences were hosted by Explore St. Louis. All opinions are mine.

Fuel up for a day of gourmet enjoyment with a cup of java at Park Avenue Coffee. Locally owned and operated coffee is sourced directly from farms in Ethiopia, Costa Rica and other well-known coffee regions of the world before being open-roasted in St. Louis. The original cafe is located on Park Avenue (hence its name), just across from historic Lafayette Square, but now there are four locations in the St. Louis subway.

Dine like a local by pairing your coffee with a slice of gooey butter cake. While you might associate this treat with celebrity chef Paula Deen, it was actually invented in St. Louis when a forgetful baker accidentally doubled the amount of butter in her cake recipe. (Hey, that’s just two sticks of butter, y’all!) The result is a coffee cake base topped with gooey custard and dusted with powdered sugar. And yes, it is commonly enjoyed for breakfast in Saint-Louis.

Baking enthusiasts won’t want to miss Nathaniel Reid Bakery. Located in the St. Louis suburb of Kirkwood, Nathaniel Reid has won a long list of accolades, including Best Cake in Missouri, Pastry Chef of the Year, and semi-finalist James Beard.

Start your day with a sweet bun like a fruit-filled danish or maple spread. Or bite into the most flaky, buttery, legit croissant this side of the Atlantic. For a heartier first meal of the day, order the breakfast croissant sandwich. With scrambled eggs, ham, bacon, and Havarti cheese layered inside one of these incredible croissants, your taste buds will understand why it was named one of America’s Best Sandwiches by Food Network.

Pro tip: Be sure to place a takeout order of a dozen macaroons, a box of cream puffs or a dome of ruby ​​tea to satisfy your sweet tooth later in the day!

If you prefer to start your day with hearty meals (and a little less sugar and carbs), The Mud House is a great option. Open daily from 7 a.m. to 2 p.m., this St. Louis restaurant offers hearty breakfast dishes like bacon and eggs and lunch dishes like soups, salads and sandwiches .

The Mud House is a great place to try another local dish: The Slinger. Traditionally, a slinger slips two fried eggs onto a burger patty and tops it off with a generous ladle of chili peppers, a handful of grated cheese and a sprinkle of diced onions. But The Mud House has its own take on this St. Louis classic using vegetarian black bean chili. It even offers a tofu version for vegans.

Pro tip: For another take on a slinger, try the Southwest Diner‘s version that includes savory red or green chili peppers.

While diners expect to see a wide array of rice and noodle dishes at Asian American restaurants across the country, it’s unusual to see a sandwich on the menu. But this is not the case in Saint-Louis. Recognizing that Americans eat a lot of ingredients between two slices of fluffy white bread, a creative St. Louis-based immigrant restaurateur invented the St. Paul sandwich, which you’ll find on the menu of many Asian-American restaurants in the city.

What is a St. Paul sandwich? The original recipe layers a fried egg foo young patty, crispy iceberg lettuce, sliced ​​tomatoes and pickles between two slices of white bread. But many restaurants now offer versions that include chicken, ham, shrimp and crab.

If you want to stick to more standard fare, you’ll enjoy Mai Lee’s delicious Vietnamese noodle soup (banh canh), soft steamed pork buns (Banh Bao) and fill bowls with noodles (hair bun). But if you want to try the unique sandwich invented in St. Louis, Mai Lee’s St. Paul was named one of the best sandwiches in the country by Food Network.

5. Authentic Italian cuisine on the hill

When you think of Italian communities in the United States, New York’s Little Italy might be the first thing that comes to mind. But St. Louis has a thriving Italian-American community known as The Hill. Located on the heights just south of Forest Park, the neighborhood circles St. Ambrose Catholic Church and Berra Park, named after baseball legend Yogi Berra, one of The Hill’s most famous residents.

Although many immigrant communities across the country have evolved over the past century, The Hill is widely recognized as a cultural neighborhood that the true Italian-American community still calls home. With Italian flags flying over cozy red brick houses and shop awnings striped in green, white and red, The Hill offers an assortment of delicious places to enjoy a plateful of homemade pasta or fresh meatballs. covered with a tasty marinara sauce. Anthony’s Tavern and Charlie Gitto’s Tavern are two of my favorites.

Whichever restaurant you choose, be sure to start your meal with an order of grilled ravioli. This original St. Louis dish is made by breading fresh beef ravioli and frying them to crispy perfection (much like eggplant Parmesan) before serving with shredded Romano cheese and marinara sauce.

In New York’s Little Italy, diners fold large triangles of thin-crust pizza lengthwise to eat this popular Italian dish. But the St. Louis-style pizza piles the toppings on a cracker-like crust that’s cut into 2-inch squares, not slices. And while mozzarella is the cheese of choice in the East, St. Louis pizza features Provel, a unique combination of cheddar, Swiss and provolone invented on The Hill.

Established on The Hill over 50 years ago, my favorite place to eat St. Louis style pizza is Imo’s. There are now about 30 Imo pizza places in the St. Louis metro area, with nearly 100 locations spilling out of Gateway City and across state lines into Kansas and Illinois. So wherever you are in St. Louis, it’s convenient to order a fancy, vegetarian, all-meat restaurant or create your own. And be sure to try Provel Bites!

Across Missouri, Kansas City is known as the barbecue capital of the world. But surprisingly, St. Louis consumes more barbecue sauce per capita than any other US city. And not just a bit more – the people of St. Louis eat twice as much as the national average! Do your part to help St. Louis retain that Salt + Smoke claim to fame.

With tender slices of beef brisket, pulled pork and pork chops in sauce on the menu, meat lovers are spoiled for choice. But Salt + Smoke also offers a smoked salmon sandwich for pescatarians and a falafel burger for vegetarians. And from beef fat fries to baked beans to creamy corn, the sides are just as delicious as the entrees. Plus, all but the white cheddar mac and cheese can be made gluten-free for anyone visiting St. Louis with a food allergy.

Pro tip: St. Louis style ribs are always cut into a perfect rectangle. Check out other places to enjoy it here.

The great crucible of Saint-Louis welcomed large numbers of Bosnian refugees in the early 1990s as they fled the horrors of war that finally shattered Yugoslavia. In the shadow of Bevo Mill, an iconic landmark in southern St. Louis, they transformed shuttered businesses and vacant homes into a thriving community now known as Little Bosnia. But the city’s best-known Bosnian restaurant got its start as a food truck.

After falling for her husband of Bosnian origin, chef Loryn Nalic immersed herself in the flavors of her native country. And in 2017, they created the Balkan Treat Box as a food truck which introduced the Gateway City to dishes from the Balkan region, including cevapigrilled minced meat sausages and pljeskavica, a Balkan style burger stuffed with cheese. The food truck was a resounding success, delighting the taste buds of writers with national audiences at New York Times and earning Chief Nalic a spot on the James Beard 2020 semi-finalist list.

Now, with a physical location (right next to an Imo’s) in suburban Webster Groves, you can enjoy the best cevapi in the country (according to Food Network), piss (wood-fired Turkish flatbread), and sutlija (rice pudding with pistachios and rose petals), Tuesday to Saturday from 11 a.m. while supplies last.

Fun fact: Saint-Louis is now home to the largest Bosnian population in the country.

Nothing caps off a day of tasty adventure better than a scoop of ice cream. And in St. Louis, Clementine’s Naughty and Nice Creamery can satisfy your sweet tooth and serve as a nightcap in one deliciously effective measure. The “naughty” side of the menu is a boozy scoop that pairs sweet ice cream with rum, bourbon, cabernet and other grown-up drinks, creating flavors like boozy banana rum, bourbon pecan maple and cabernet chocolate. The “fun” side of the menu includes unique and delicious (albeit non-alcoholic) flavors like Captain B’runch, Love Handles, and Gooey Butter Cake. Clementine’s also offers over 10 delicious vegan ice cream flavors including Hot Toddy, Lady Marmalade, Coconut Chai, and Vegan Reishi and Chaga.

Pro tip: Now you can enjoy one of America’s tastiest ice cream shops anywhere in the country by having pints of Clementine Ice Cream delivered to you.