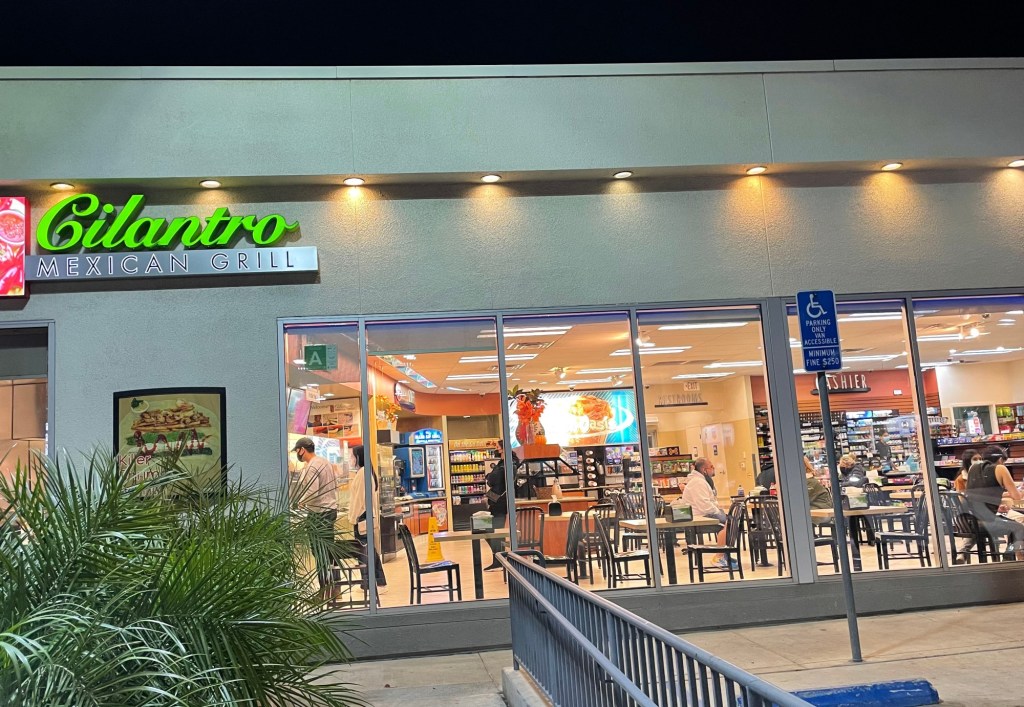 Driving from New York to Florida, my family always stopped in Hamer, South Carolina at a legendary truck stop called South of the Border. To my surprise, it included a Costco-sized fireworks store, where you could buy enough rockets and sparklers to topple a banana republic. And of course we always went to the sprawling Sombrero restaurant for what was probably the first Mexican food I had ever eaten.

In the years since, I’ve been to a slew of truck stop restaurants across the country — at city-sized gas stations like Iowa 80 in Walcott, Iowa; Pyre at Big Cabin, Oklahoma; Kings Truck Stop & Casino in Port Barre, Louisiana; Big Country in Merkel, Texas, and many more. Gas pumps number in the dozens, convenience stores are filled with wonders, and restaurant portions are huge – it’s food for truckers, after all.

And while there are no truck stops in the San Fernando Valley, there are gas stations where you can grab little more than a microwave hot dog. Much more, in fact.

My favorite gas station restaurant, and one of my favorite restaurants overall, is the unique and quirky restaurant tokyo cube (3175 Boul. Cahuenga W., Universal City; 323-366-2233, tokyocubela.com), which has nothing to do with anything found at truck stops in America. It is adjacent to AutoBahn Fuel, where the valley turns into the city, where Studio City passes through Universal City on its way to Hollywood. You have to walk past the pumps and the AutoBahn market to get there, which makes eating on the small outdoor patio an… alternative experience.

Finding an Asian fusion store as good as Tokyo Cube at a gas station is a bit like finding a winning lottery ticket in a box of Cracker Jack. This is where locals go for sake and beer, and buns of every type, stripe, and hue imaginable. Tokyo Cube is as fun as eating in Tokyo – and so much closer.

It’s a cheerfully chaotic restaurant, with maniacally busy chefs and waiters, a handful of tables, big screens here and there, and cartoons on the walls. It’s a bit like the Tokyo of “Lost in Translation”, where somehow everything works, but you don’t know how.

There’s a checklist menu for basic nigiri sushi and ‘regular’ rolls – a menu that barely scratches the surface of what makes Tokyo Cube such an experience, as much of the menu is taken up by appetizers, soups, salad, noodles, specialty rolls, vegetable rolls, poke bowls, sashimi mixes, grilled dishes, and “kitchen special” dishes like Japanese king crab udon carbonara and coconut curry and chicken karaage ramen.

You can have lava chocolate brownies for dessert. Sure why not? You can also have the original chicken gyoza, which looks like a pancake, until you flip it over and find the potstickers are embedded in the pancake. That’s why the menu tells us they are served “okonomiyaki style” – a Japanese pizza. Clever! And very tasty too.

But then twists are all over the menu. As it says, it’s a “Japanese fusion” restaurant. Thus, the edamame is served as is. But it also comes with a garlic butter (does that make it French?) and a garlic and truffle sauce (which is definitely French!).

There are nice crispy fries, a little weird in a sushi bar, topped with a spicy mayonnaise sauce. Mushrooms are stuffed with spicy crab and cream cheese. There’s a salad made with corn tempura – corn in a crispy batter. And that aforementioned king crab udon carbonara is Japanese-Italian. It’s decidedly heavy in a world of seared tuna over rice. But hey, “fusion” is the word!

The menu informs us that parking is available at the gas station. I have been to many sushi bars and this offer is probably a first.

Although only about 20 minutes north on the highway, the experience at Mexican grilled cilantro (at the Chevron Gas Station, 7214 Whitsett Ave., North Hollywood; 818-765-7998, www.cilantromexican.com) couldn’t be further! This particular Chevron resort is about as big as any resort in the valley, with a huge grocery store selling just about everything except ski boats and helicopters.

And Cilantro isn’t just adjacent to the grocery store – it’s actually inside. It sits next to the surprisingly chic coffee area, where you can flavor your brew in a thousand and one ways. (Does that exist for long-haul truckers too these days? Have they traded in their cuppa joe for a cappuccino or cold brew?)

There is a breakfast menu (the place opens at 6am!) consisting of burritos, bowls and sandwiches. As the day progresses, these dishes are joined by tortas and tacos.

Dishes are all cooked to order, from a huge selection of choices behind the counter – carne asada, chicken al pastor, beef barbacoa, carnitas, grilled shrimp and vegetarian. There are enough accessories to make burritos and bowls so big they need their own wheels.

I guess it’s food you can eat in your car, although I’d do it safely parked in the parking lot or while refueling. If you drop a burritos in your lap at 65 mph, you’re in serious trouble. And I think that can be a moving violation. But then, isn’t everything?